The Baltimore County political operative who took $22,000 in cash bribes from undercover FBI agents and then agreed to wear a body wire for federal investigators – a pivotal role in the conviction of former Maryland state Sen. Nathaniel T. Oaks (D) — was sentenced Tuesday to two months of home detention and nine weekends in jail for falsifying an income tax return.

Robert James Barrett, 67, of Upperco, once a top aide to two Baltimore County executives, was sentenced in Baltimore by U.S. District Judge Richard D. Bennett, who had accepted his guilty plea to the one income tax charge more than a year ago, on Sept. 19, 2017.

Bennett ordered Barrett, who pleaded guilty to lying on his 2013 tax return, to pay $16,660 in back taxes, plus whatever additional amount the Internal Revenue Service requires, along with a $22,000 fine. He also must pay an assessment of $100. 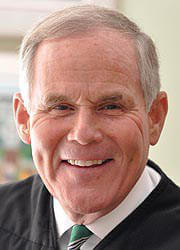 Barrett will be on probation for a year, through Oct. 8, 2019, and must complete 300 hours of community service, to be performed after his two months of home detention, which will begin later this month.

Bennett ordered Barrett to serve nine consecutive weekends at the Howard County Detention Center, beginning Oct. 19. He must show up at 6 p.m Friday and remain in jail until 6 p.m. Sunday, the judge said.

Assistant U.S. Attorney Kathleen O. Gavin, who prosecuted both the Barrett and Oaks cases, argued for “at least some period of home detention” because he falsified his tax returns for the 2011, 2012 and 2013 calendar years.

“This is not a singular act that he committed, but it was sustained conduct,” said Gavin, who heads the Fraud and Corruption Section of the U.S. Attorney’s Office.

Robert C. Bonsib, Barrett’s defense lawyer, argued that his client should get no prison time at all, but rather only probation – without any electronic monitoring.

Bennett, however, made clear that he was “troubled” by what was not being addressed by either side Tuesday.

Bennett said he was particularly bothered by the fact that in addition to the $22,000 in bribes Barrett had taken, he also accepted five checks totaling $37,500 from two “Baltimore County real estate developers” – money that also was not reported to the IRS – while he was a county employee.

The $37,500 paid to Barrett, and detailed in an earlier plea agreement, occurred “before any matter of dealing with any FBI official … or undercover agents,” the judge said.

“It’s blatantly corrupt for an official to take checks from someone doing business with the county government,” Bennett said. “I’m troubled that we’re really not addressing that.”

Both Gavin and Bonsib – who last year had agreed on the plea deal, which was not binding on Bennett – seemed a bit taken aback by the judge’s comments.

Bonsib attempted to clarify Barrett’s taking the $37,500 from the developers, but it only seemed to muddy the water.

“There’s a difference … between corrupt conduct and poor judgment exercised by someone who is in an official position,” Bonsib said. “There’s an important difference there.”

The defense lawyer said Barrett did not hold a position in the government where he was able to award county contracts at the time he received money from the developers.

In return for another payment, “he was working as a consultant, providing information about how government works,” Bonsib said.

“Independent of [his job] with Baltimore County?” Bennett asked.

“This is where I’m drawing the line, your honor, between corrupt and what might … be called a conflict … but not where you’re getting a quid pro quo,” Bonsib said.

“It was not corrupt; it was poor judgment in accepting what were … intended to be loans from the developers,” he said.

In one case, Bonsib said, Barrett had started to repay one of the loans, but ultimately did not.

However, forgiving the “loans” – “which made them gifts or whatever you want to call them” – is “not causally connected to any official act that he performed,” Bonsib said.

At that point, Gavin interrupted to ask Bennett if she might speak with Bonsib privately, which the judge allowed.

Finally, Bennett asked if perhaps a brief recess might be helpful, which the lawyers agreed would be the case.

But first, the judge said he wanted to put his concerns about the case on the record.

“We’re not dealing in a vacuum here,” Bennett said. “We’re talking about someone writing checks to somebody in the county government … and he doesn’t report it on his income tax return.”

Bennett then invoked the specter of past crimes of political corruption.

“Let’s just say there’s a history of this kind of thing in Baltimore County,” Bennett said.

“The notion that we put this in the guise of a tax return and [unreported income]… and all the other good things he did with respect to an undercover investigation by the FBI” does not address the question of “fairness… in terms of the punishment that Mr. Barrett faces,” he said.

“We can dance around that fact all we want, but they’re the undisputed facts before me: We’ve got five checks being handed to somebody who works for the government,” Bennett said.

“That inherently is a problem – and it doesn’t pass the smell test,” Bennett said.

The judge then took a recess, which allowed the lawyers to huddle with each other and with three federal agents — two from the FBI and one from the IRS – also in the courtroom.

After about 10 minutes, Gavin and Bonsib left the courtroom to join Bennett in his chambers, presumably to resolve any questions over the matter of the earlier checks to Barrett.

Another 15 minutes elapsed before they returned and Bennett began the proceeding again.

Barrett, a beefy man, dressed in a gray suit, red striped tie and tab-collared white shirt, stood and read a brief statement to the court.

“I’d like to say how truly sorry I am for this poor lack of judgment,” Barrett told the court.

He apologized for his actions and stressed that after he was approached by the government to cooperate that he did so without hesitation.

Later, however, in pronouncing sentence, Bennett said, “A shadow over this and all your cooperation with the government is the acceptance of checks from two real estate developers.”

Barrett had been a high-level official in the Democratic administrations in Baltimore County of C.A. “Dutch” Ruppersberger, now a U.S. congressman, and James T. Smith Jr., now a top adviser to the Baltimore mayor.

For eight years, from 1994 to 2002, he was senior executive assistant to Ruppersberger during his two terms as county executive. After Smith was elected executive in 2002, Barrett was his first appointment – as director of recreation and parks, a position he held for another eight years.

In 2010, just before the late Kevin B. Kamenetz was first elected executive, Barrett moved to become the Baltimore County Public Schools System’s executive officer for community outreach/government relations. He retired from that position March 1.

Barrett lied on his income tax returns for calendar years 2011, 2012 and 2013 by not declaring the additional $59,500 for those years, including the $22,000 he took as cash bribes from two people he did not realize were actually FBI agents working undercover, court records show.

The FBI began an undercover criminal investigation of Barrett “prior to the 2013 calendar year,” according to a statement of facts in court files, but the filing does not explain why federal authorities began their probe.

Barrett apparently agreed to work undercover for federal investigators when they confronted him with accepting bribes in the summer of 2014, Maryland Matters learned and confirmed in court records earlier this year.

There was no mention in court Tuesday of Barrett’s specific arrangement with the government, or his wearing a wire, though certain information was sealed in the sentencing hearing and kept from being heard by those in the courtroom.

He had been a prime, though unnamed, witness in the government’s case against Oaks, a Democrat who represented West Baltimore’s 41st District.

During the time he was cooperating with federal authorities, Barrett met with Oaks multiple times and eventually introduced him to FBI undercover source “Mike Henley,” posing as a Texas businessman who wanted to build apartments in Baltimore.

Oaks ultimately took $15,300 from “Henley” as part of a bribery scheme that led to his conviction.

Court filings in the Oaks case repeatedly referenced wiretaps of phone calls and transcripts of conversations recorded from a body wire Barrett wore for federal authorities.

Until a Maryland Matters article revealed his identity in March, Barrett was only known publicly in the Oaks case as “the Confidential Witness” (“CW”) and referred to as “S-00063808” by the ex-lawmaker’s defense attorneys.

Federal investigators have never acknowledged Barrett’s role in the Oaks probe, and they continued to decline comment Tuesday.

The governor’s victory tour includes a stop before one of his favorite organizations.