As they work toward their goal of flipping five state Senate seats now held by Democrats, Maryland Republicans believe they have put another seat in play. A recent poll obtained by Maryland Matters showed businessman Joe Hooe, the Republican, leading Del. Clarence K. Lam (D) in the race for the open 12th District seat, in Howard and Baltimore counties. The single-day poll of 353 likely voters, taken on Oct. 1, had Hooe at 39 percent and Lam at 32 percent. The survey, taken by TC2, a GOP marketing and strategy firm, had a 5.5-point margin of error. 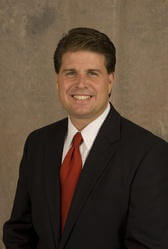 Joe Hooe, GOP Senate candidate in District 12 According to a Republican summary of the poll, Hooe’s lead is attributable to a few different factors. Gov. Lawrence J. Hogan Jr. (R) had a 34-point lead over Democrat Benjamin T. Jealous in the 12th District – up from 25 points in another GOP poll taken on the race in August. Hooe, who owns a tire distributorship in the Federal Hill neighborhood of Baltimore and has run for office unsuccessfully three times before, has also been the beneficiary of Republican spending to define Lam and the contours of the race. The candidate has begun airing radio spots and the state GOP is running digital ads. Hooe’s poll standing shows dramatic improvement over the Republican survey taken in mid-August. That could be a function of several factors. Political professionals often consider single-day polls less reliable than polls taken over a period of a few days. Many pollsters saw a dramatic spike in Republican numbers all across the country over the past two weeks, fueled by GOP energy over the Supreme Court nomination of the newest justice, Brett M. Kavanaugh. Opinions differ over whether those numbers will be sustainable between now and Election Day. What’s more, the Oct. 1 poll was a robocall made exclusively to land lines, meaning the poll respondents tended to be older. In a possible attempt to offset that likelihood, the sample size in the October poll was slightly more Democratic – 58 percent to 28 percent Republican – than it was in the mid-August poll, when it was 55 percent Democratic and 29 percent Republican. The earlier survey when to voters with landlines and cell phones. Nevertheless, Hooe’s boost in the latter poll is striking. The August GOP survey found Lam leading Hooe 48 percent to 30 percent in an initial head-to-head matchup. The “informed ballot” in that survey – an attempt to gauge voters’ views after certain statements were read about both candidates – showed Lam ahead, 42 percent to 32 percent. In that Aug. 12-13 poll of 314 likely voters – taken by Red Maverick Media with a 5.5-point margin of error – Lam, a physician finishing his first term in the House of Delegates, was viewed favorably by 33 percent of voters and unfavorably by 5 percent. Hooe was viewed favorably by 12 percent and unfavorably by 5 percent. Since that poll, Hooe’s favorables have gone up and Lam’s have gone down a bit. In the October poll, Hooe was viewed favorably by 28 percent and unfavorably by 9 percent. Lam was also viewed favorably by 28 percent, compared to 14 percent who viewed him unfavorably. Republican strategists believe they have now put eight Democratic-held state Senate districts in play – all of them carried by Hogan in 2014. If the GOP is able to flip five seats, Democrats, who currently hold a 33-14 advantage in the state Senate, will not be able to automatically override Hogan’s vetoes, assuming he wins a second term next month.

Del. Clarence K. Lam Like some of the Senate battlegrounds, the 12th District race is taking place in a district where Hogan is very popular, even though other political trends may favor the Democrats. Hogan carried the district by more than 11 points in 2014, while Hillary Clinton beat President Trump there by 17.5 points two years later. The incumbent senator, Budget and Taxation Chairman Edward J. Kasemeyer (D), is retiring. He won reelection by more than 17 points in 2014 over military veteran Jesse Tyler Pippy (R) — who is now running for a seat in the House of Delegates in a Frederick-Carroll county district. Of the highly-contest Senate races, Democratic and Republican leaders agree that District 42 in Baltimore County, where Sen. James Brochin (D) is retiring, is likely to change hands. Four districts appear to be pure tossups: District 3 in Frederick County, where businessman Craig Giangrande (R) is taking on Sen. Ronald N. Young (D); District 8 in Baltimore County, where Del. Christian J. Miele (R) is squaring off against Sen. Katherine A. Klausmeier (D); District 30 in Anne Arundel County, where former Del. Ronald A. George (R) and civic activist Sarah Elfreth (D) are competing for an open seat; and District 38 on the Lower Shore, where Del. Mary Beth Carozza (R) is challenging Sen. James N. Mathias Jr. (D). Republicans also think open seats in Anne Arundel County’s District 32 and Charles County’s District 28 are competitive, but those seem like longer shots despite Hogan’s popularity. In District 32, the GOP nominee, Anne Arundel Councilman John J. Grasso, is on the defensive following insensitive comments about Muslims and immigrants last week.