Here’s a (former) Republican endorsing a Democrat: Former Anne Arundel County Executive Laura Neuman announced Wednesday that she is backing Democrat Steuart Pittman for her old job. “I am supporting Steuart Pittman because he wants to serve for the right reasons,” Neuman said in a statement. “We share the same vision for a county government that is transparent, accountable, and puts the needs of communities first.” 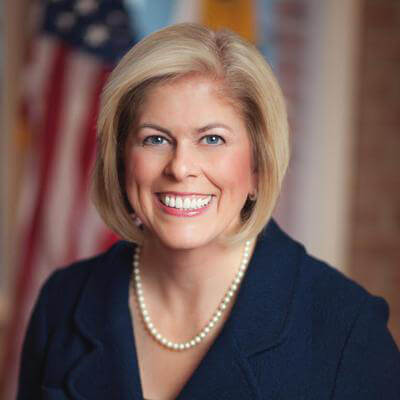 Laura Neuman  Neuman, who was an economic development official in Howard County at the time, was appointed county executive in 2013 following the resignation of former county executive John Leopold (R). But seeking a full term in 2014, she lost the Republican primary to then-Del. Steve Schuh, who went on to be elected – and who Pittman is now trying to defeat. “When I became county executive, my first job was to clean up the culture of corruption left by John Leopold and his staff,” Neuman said. “Steve Schuh has brought back the same pay-to-play politics and the same cronies. Steuart Pittman has the experience and integrity to move this county forward and restore trust in county government.” Just how much influence Neuman will have is an open question. She and her family moved to Baltimore County in 2016, and she has told interviewers that she is now a political independent. When Maryland Matters pointed out on Twitter Wednesday that some people might view Neuman’s endorsement of Schuh’s opponent as sour grapes, she replied with a tweet: “I spent 8 months getting to know Steuart Pittman. He is in this for the right reasons.” Getting on Board More than 130 candidates for state office – including Democratic gubernatorial nominee Benjamin T. Jealous – have pledged to support a proposal to create a Prescription Drug Affordability Board. Thirty-three Senate candidates and 99 House candidates have signed on. The list features three Republicans, including one incumbent: Del. Rick Impallaria, who represents Baltimore and Harford counties; Stephanie Boston, who is challenging Sen. Delores P. Kelley (D-Baltimore County); and Harvey Jacobs, who is running in Montgomery County’s 15th District. “We believe that Maryland voters will elect a General Assembly committed to passing this life-saving legislation,” said Vincent DeMarco, president of the Maryland Citizens’ Health Initiative, which has been working hard to collect the lawmaker commitments. The legislation would set up a board that would require drug manufacturers to justify the high cost of their medications. The panel would also establish a reasonable price Marylanders would pay for prescription drugs.  The legislation was introduced and failed in the 2018 General Assembly session. But advocates plan to try again next year. Click here to see the full list of candidates who  pledged to support the proposal.

The Maryland State Board of Elections has announced some important administrative dates and key activities as Election Day approaches.