A three-judge U.S. District Court panel expressed a clear willingness on Thursday to force Maryland to adopt new congressional boundaries for the 2020 election — if they find that a challenge to the state’s current map has merit.

A group of Republican voters in Western Maryland’s 6th District sued the state in 2013, claiming the map drawn after the 2010 census represented an unconstitutional abridgment of their First Amendment rights.

The case, Benisek v. Lamone, has never gone to trial. Nevertheless, the dispute reached the Supreme Court in late March, when the two sides presented oral arguments on whether a court case should take place. In June, the Supreme Court affirmed a lower court’s 2017 decision not to block the state from using the O’Malley-era map, holding that the district court’s denial was not an abuse of discretion.

Thursday’s hearing before three federal judges in Baltimore marked the first time since the Supreme Court’s ruling that lawyers for the plaintiffs and the state were back in court. 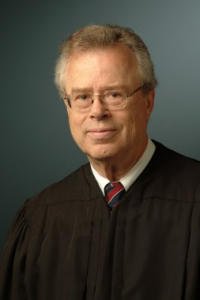 Each is seeking summary judgement against the other side. The 6th District was represented by Republican Roscoe G. Bartlett for 20 years, until the Democratically-controlled General Assembly — working with then-Gov. Martin J. O’Malley (D) — redrew the lines in 2011.

In 2012, taking advantage of the new boundaries, Democratic challenger John K. Delaney defeated Bartlett, and he has held the seat ever since, winning by an average of 12 points.

Attorney Michael B. Kimberly, representing the voters challenging the state’s map, noted that 60,000 Republicans were moved out of the 6th District in 2011.

“[They] were denied their right to associate with one another,” he told the court. “And they were drowned out and diluted by Democrats in the 6th … They’ve been placed on an unequal playing field.”

Kimberly also argued that the number of voters moved into new districts statewide was far more than needed to right-size Maryland’s eight congressional districts. Assistant Maryland Attorney General Sarah W. Rice, in defending the state’s map, noted that Republican registration in the five counties that make up the 6th District has risen since 2011, and that the number of Republican votes and GOP turnout have climbed as well.

“This calls into question the causal link that plaintiffs are asking you guys to make,” Rice told the judges.

She also accused the plaintiffs’ attorney of “unsupported cherry-picking of campaign finance reports” to buttress the claim that GOP voters were becoming less politically active.

The judges did not rule immediately on the attorneys’ motions for summary judgement, but they appeared to indicate a willingness to force a new map — even if it would only be for the 2020 election.

“If there is a First Amendment claim — if it is there — they should be entitled to a remedy, even if it is one election out of five,” said 4th U.S. Circuit Court of Appeals Judge Paul V. Niemeyer, a Republican appointee. “Do we just ignore it? Don’t we have an absolute duty to address it?”

“We still have an election cycle in front of us,” he added.

The General Assembly and the governor will use data from the 2020 federal Census to draw new maps in 2021, in time for the following year’s elections.

Added Chief U.S. District Judge James K. Bredar, a Democratic appointee: “Half of the people don’t know what district they’re in because of the shape of the map. You can’t tell what district you’re in without a microscope, it’s so convoluted. The public is not well served by it.”

Maryland’s map, with its tortured lines and extraordinarily non-contiguous districts, has been criticized as one of the worst ever drawn. Even before the attorneys began to speak, Bredar asked if the two sides had attempted to negotiate an end to the litigation.

“The court was very much hoping that the plaintiff and the state would reach a resolution, and maybe was somewhat disappointed that there had not been,” said Del. Michael Malone (R-Anne Arundel), who traveled to Baltimore to observe the hearing. “Certainly my reading of Judge Niemeyer is — if he feels that there has been a constitutional infringement on Republicans’ rights as citizens — that there should not be a waiting period until the next Census is taken.”  There was one moment of levity at the hearing when a slide showing the zig-zaggy districts proposed by the state’s congressional delegation appeared on the courtroom monitor. The judges looked at one another and chuckled audibly.

“Absurd on its face!” Niemeyer, who presided over the three-judge panel hearing the redistricting challenge, closed the proceeding without hinting at when the trio would return its ruling. “We’ll see if three judges can take this and agree on something,” he said.

The Supreme Court disappointed many reform advocates with its decisions to sidestep meaningful action on gerrymandering earlier this year.

The governor’s victory tour includes a stop before one of his favorite organizations.

Who will take responsibility and ultimate accountability for improving outcomes in Maryland schools over the next decade?