It’s that time of year again: the elections and school reforms dominate the news today. Community college has been a major highlight in Maryland politics, too.

Since the cost of college is too expensive for many students, both Gov. Larry Hogan and Democratic gubernatorial candidate Benjamin Jealous have advocated free community college for qualified Maryland residents.

The Commission on Innovation and Excellence in Education, otherwise known as the Kirwan Commission, also has realized the value of community colleges and proposed that all high school students should have the option of earning an associate degree in high school before graduation with the option of transferring to a four-year university.

While I respect these noble ideas, I believe they are shortsighted at the same time because none of them address systemic problems with our articulation system for transfer credit between universities and community colleges.

Assuming there are no changes to the current system, many more students will continue to lose their credits during transfer and spend more time and money than they should in college if the above policies are implemented. While virtually any policy almost always has some degree of problems in implementation, I am still very concerned we, as a state, are not aware of these articulation issues.

Our administrative agencies have done little to recognize and rectify the problem, and our legislators do not appear aware of the problem in the first place.

This is the story of my undergraduate career. I still remember the day when I transferred from Anne Arundel Community College to the University of Maryland, College Park in fall 2012. It was a panoramic view of beautiful green lawns, Greek architecture and lavish facilities.

Nothing could go wrong I thought to myself, until I found out some of my credits did not transfer over despite a zealous preparation on my part. How could this be? The law guarantees all credits will transfer, I thought to myself. So, I decided to study articulation issues more closely and was disturbed at what I discovered.

Nearly 50 percent of graduating high school seniors in Maryland enrolled in one of the 16 state community colleges from 2008 to 2014 compared to about 20 percent of those students who enrolled directly in a Maryland four-year public university, according to data from the Maryland Longitudinal Data System. And many of these same students finish their studies in Maryland. In 2017, the University System of Maryland issued the report “Transfer Students to the USM: Patterns of Enrollment and Success FY 2017” which stated 65 percent (8,851) of new students on University System of Maryland campuses that year came from a Maryland community college.

Both state law and policy documents suggest problems with how the Maryland articulation system was designed, managed and evaluated. Maryland law dictates that the Maryland Higher Education Commission, the state’s governing board for higher education policy, has the authority to “in conjunction with the governing boards, establish standards for articulation agreements.” The challenge here is that the Articulation System for the University System of Maryland, or ARTSYS, the database which faculty and students use to check the transferability of credits, is housed, maintained and controlled by the University System of Maryland which is also responsible for its evaluation.

The Maryland Higher Education Commission’s 2017-2021 Maryland State Plan for Postsecondary Education noted the political tensions between stakeholders and that “ARTSYS should be evaluated to determine whether there are structural issues that limits its effectiveness for certain students and/or certain institutions.” The reason for structural issues with ARTSYS is that there is no accountability and oversight of faculty for providing updates to the system.

Upon review of the Code of Maryland Regulations, there are almost no regulations that dictate how often faculty must meet to discuss course equivalencies and the transferability of credits, excluding an associate degree in engineering which is described in some detail. I found in my review of ARTSYS that some courses have not been updated in years, creating a false sense of security for transfer students that their courses will transfer. Legislators could not foresee future problems in policy implementation when they decided in 2013 to maximize the transferability of credits between community colleges and universities with a new law.

Landmark reforms came in 2013 with Senate Bill 740 College and Career Readiness and College Completion Act of 2013 designed to guarantee the transferability of credit between institutions and improve articulation. The Maryland Higher Education Commission supported the bill in the written testimony of then-secretary Danette Howard. She recommended a task force for improving articulation and course reviews, but her proposals were ignored by both the House of Delegates and the Senate in the Maryland General Assembly for some reason.

The University System of Maryland, ironically, was not convinced there was a problem at the time in their written testimony for Senate Bill 740 and stated that any revisions to the current system would be overly burdensome and costly to implement. They reported that a survey was distributed during that time to 1,406 community college students who transferred to a four-year university where only 40 percent of students were able to transfer all of their community college credits.

The reason given by the University System of Maryland for credit loss was a lack of comparable courses or students earning above 60 community college credits. Why could not 100 percent of credits transfer in the first place like the law intended? Moreover, Senate Bill 740 required a study of ARTSYS and recommendations for improving the system.

The Maryland Higher Education Commission’s Student Transfer Advisory Committee report from 2013-2014 recognized the difficult of timely updates to ARTSYS — some institutions do not update their courses on a regular basis because the system is inherently difficult to manipulate. Ultimately, the committee recommended keeping the current system in place largely because of budget constraints and uncertainty with what the system’s goal should be for the future. Unfortunately, ARTSYS and its regulation is not a legislative priority for the Maryland General Assembly.

I spoke with some students in interviews who wished there was a better way to account for their transfer credit. Universities have the autonomy to decide what credits will transfer or not without informing students ahead of time. In fact, transfer students cannot determine what courses will transfer until after they have applied and accepted an admission offer from an university — ARTSYS cannot always predict everything.

Several students told me how much credit they lost on transferring and then had to either retake classes at the university or take “filler” classes to create a schedule. Because of these frustrations, some students may drop out of college altogether which may be an antecedent variable in the following graph from the Maryland Longitudinal Data System, ideas not readily apparent and understood by other researchers. 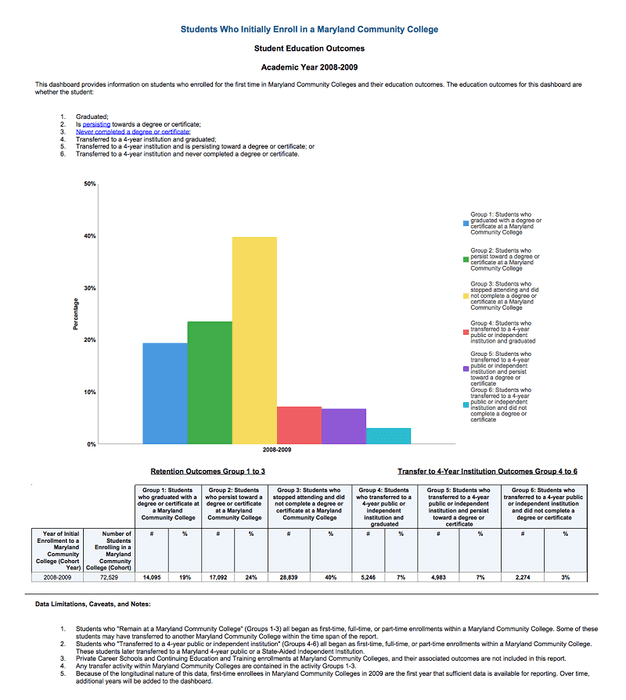 Very few students managed to persist, transfer and graduate from a Maryland university in 2008-2009 (regretfully, no recent data exists). When students drop out of college, it costs the state money as earlier studies have shown.

The American Institutes for Research showed that Maryland lost $7,117,000 in federal income taxes and $2,253,000 in state income taxes in 2002 from college dropouts. This number, while limited in scope and outdated, could be even greater today if it were to include those students who drop out of community college. The issue is that very few people wish to confront the magnitude of the problem in the first place: many simply believe there is no problem.

None of these findings should surprise anyone though: our education policies are designed to be this way because it is more profitable to keep a broken system in place rather than fix it. Because of institutional politics, community colleges and universities cannot always agree on standards and curriculums. If they were to do so, it would likely reveal gaps in curriculums and cause institutions to lose students to each other. So, we choose instead to raise standards by lowering standards. The profit of the institutions is more important than the needs of the students.

This is backward thinking that is moving Maryland far behind other states and no one — administrative agencies, legislators, university administrators or faculty — has really done anything about the problem. There are far too many transfer students who fall by the wayside and are forgotten like me, and no way exists to even begin measuring the magnitude of the problem today. The infrastructure for such analysis does not exist currently, a perfect storm for government unaccountability and a lack of transparency. The tragedy of this dilemma is that it does not have to be this way.

Maryland does have the means to create a system from a non-system. There are solutions that exist that are not costly and overly burdensome to implement; Maryland should study what other states with similar articulation issues and student demographics have done to solve their problems. Time is of the essence now. With the Kirwan Commission finalizing its costs for policy recommendations this year, the Maryland Longitudinal Data System studying new transfer pathways and a solid statewide plan from the Maryland Higher Education Commission, there is a policy window for change opening now in Maryland.

There is no excuse anymore why we must ignore articulation — we cannot talk about an alignment between high school and college without mentioning articulation and transfer credit between institutions. If we can spend over 18 months studying an archaic, cryptic public school formula and justify spending over $4 billion each fiscal year to rebuild Maryland public schools into a world-class education system, then I think we can begin making even small, incremental changes to our current articulation system.

The challenge thus lies in convincing the administration to do their job in the first place and be held accountable to the people they serve.

–MICHAEL RAUP
The writer is a graduate of the University of Maryland, Baltimore County with an undergraduate degree in political science. During his time at UMBC, he served as a student consultant to the Commission on Innovation and Excellence in Education. He is a former staffer of the Maryland General Assembly with interests in the politics of higher education and economic inequality.