Maryland Gov. Lawrence J. Hogan Jr. (R) and Democrat Benjamin T. Jealous (D) fielded nine questions during their one-and-only debate on Monday. But how closely did the candidates stick to the truth? We take a look at some of their claims – and whether they’re backed up by facts. ON TAXES In opening arguments, Hogan said he had cut $1.2 billion in taxes and fees and that more businesses were open in Maryland and more people than ever were employed in Maryland. The $1.2 billion figure includes existing tax cuts that were expanded, including some that were championed by Democratic lawmakers in the General Assembly. ON THE ECONOMY Jealous said Maryland is “dead last” in the region for job growth. Hogan said Maryland is “actually first.” Jealous said 49 states have a positive economic outlook for the next year, and Maryland is not one of them. Hogan called this claim untrue. Jealous’ economic outlook statement is based on a report from the Federal Reserve Bank of Philadelphia, which released a report in March that showed Maryland was the only state with an economic outlook expected to deteriorate in the next six months. However, economists considered the deterioration a temporary fluke and the state’s standing has improved in subsequent monthly reports (including in June, when Kentucky and Ohio were listed as the only states with anticipated decreases in economic performance). 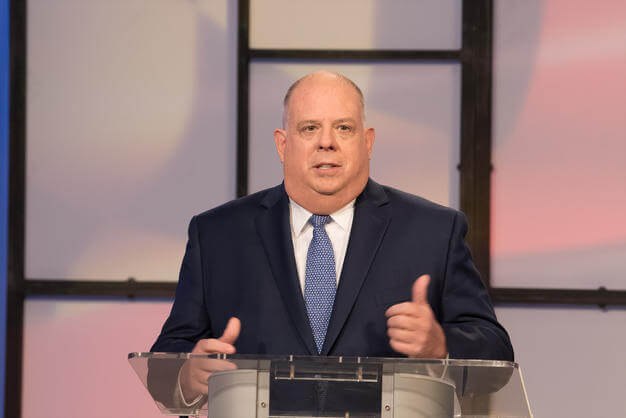 Gov. Lawrence J. Hogan Jr. Larry Canner Photography/Courtesy of MPT  Jealous also said that if Maryland had the job growth rates of Virginia, the state would have 40,000 more jobs right now. Hogan said the state had lost 100,000 jobs before he became governor and had gained 100,000 since. Both of those claims check out. As for whether Maryland is “dead last” or “actually first” in job growth, the campaigns picked different data points from the Bureau of Labor Statistics. The Jealous campaign points to job growth figures over the past year, which show Maryland trailing the nation, Virginia, Pennsylvania and Delaware. During Hogan’s tenure, the state’s job growth is second-to-last, with Pennsylvania pulling up the rear, according to the statistics. To argue that Maryland is “actually first” on job growth, the Hogan campaign pointed to a statistic from last month, when Maryland led the region – but that was not a sustained pattern. ON OPIOIDS Jealous said he would stand up to pharmaceutical companies in a way Hogan is unwilling to. “They’re not funding my campaign like they’re funding his campaign,” Jealous said during the debate. The Maryland Democratic Party said earlier this month that pharmaceutical companies have donated $1,425,000 to the Republican Governors Association in the first half of 2017. The organization, in turn, has spent more than $2 million for ads to support Hogan’s campaign. Hogan said his administration has “gone after [the epidemic] from every direction” and that he was not afraid to take on opioid manufacturers. But when Hogan said in January that he had “directed” Maryland Attorney General Brian E. Frosh (D) to join a lawsuit against opioid manufacturers, something he repeated during the debate, Frosh said it was an initiative his office was already working on and had asked Hogan for additional funding to support. STATE OF EMERGENCY Hogan said during the debate that he was the first governor in America to declare the opioid crisis a state of emergency. A fact-check shows that Massachusetts is credited as declaring the first public health emergency as the result of opioids, in 2014. Katie Kuehn, communications director for Maryland’s Opioid Operational Command Center, said other states did declare public health emergencies before Maryland — but Maryland was the first state to declare a “full” state of emergency.  “Maryland was the first state to declare a state of emergency to fight the opioid epidemic because it activated Governor Hogan’s emergency management authority and enables increased and more rapid coordination between the state and local jurisdictions,” Kuehn said. “The governor wanted to treat this epidemic as we would any other disaster, like a hurricane or blizzard.” ON EDUCATION FUNDING Hogan touted “record funding” for education, while Jealous attacked the governor for cuts that have been made to education programs. “No governor in the history of the state has ever invested more,” Hogan said, noting that he spent more on education than the amount required by funding formulas.Jealous said Hogan has cut education funding by $100 million. Both candidates backed up their claims. Hogan can indeed boast record year-over-year education funding, something built into the state’s funding formulas, which he’s funded over the required minimum. But Hogan also proposed $144 million in cuts to some particular funding streams during his first year in office and subsequent cuts to teacher training and aging schools repair programs. ON THE LOCKBOX  Hogan also claimed credit (not for the first time), for the effort to establish a “lockbox” for casino revenues, which will be a referendum before voters on the November ballot. “I’ve also proposed a lockbox to make sure that all the casino revenues — $4.4 billion more – goes into schools,” Hogan said. 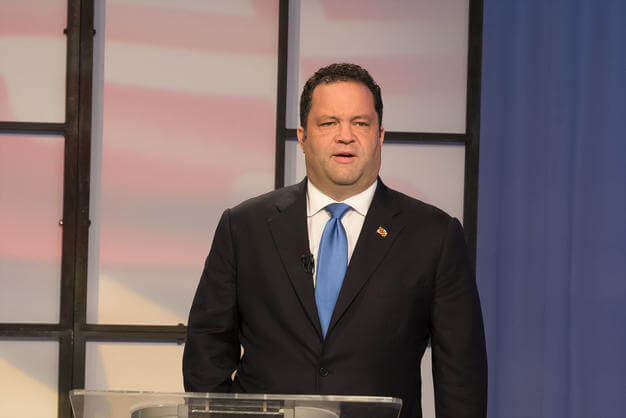 Benjamin T. Jealous. Larry Canner Photography/Courtesy of MPT Democrats have repeatedly accused Hogan of taking credit for their proposals. While Hogan proposed a lockbox bill last legislative session, the primary difference between the two proposals is that the Democratic measure that was passed by lawmakers would amend the state’s constitution to create the lockbox, a move that could not be undone without another constitutional amendment. Hogan’s bill would have created the lockbox through legislation, something his critics said was unnecessary because the governor could have used his budgetary authority at any time to block off casino revenues for education spending. The $4.4 billion figure represents the additional revenue expected from casino revenues over the next decade. TEST SCORE CHEAT? Hogan said he was not responsible for Maryland losing ground on a national ranking of state school systems and accused former Gov. Martin J. O’Malley (D) of having “cheated on the test scores.” The governor has made this claim dating back to his first campaign. The state of Maryland had ranked first on Education Week’s annual ranking of state school systems, from 2009 to 2013. In 2014, the rankings were not issued and in 2015, the ranking included a new methodology. In 2013, it was also revealed that the state of Maryland had been excluding large numbers – more than half – of students with learning disabilities and who were learning English from taking the exam. When those students’ scores were added in, the state’s ranking began to drop. “We didn’t bring the schools down from No. 1 to No. 6,” Hogan said. “They never were No. 1, we were just the first ones to be honest about it.” ON PRISONS Hogan said Jealous proposes a 30 percent reduction in the state’s incarceration rate, but the state is already leading the country in reducing mass incarceration. Hogan’s claim that Maryland is reducing the state’s prison population is supported by a report issued by the Vera Institute for Justice in May which concluded that Maryland had the fastest decreasing state prison population in the country last year, dropping by 9.6 percent. ON GUN CONTROL After a question about preventing deaths and violence from guns legally purchased in the state, Jealous said Hogan “mocked the idea of bump stock bills,” and “laughed about them.” Hogan said the claim wasn’t true and that he supported a ban. A Maryland Matters recording of a news conference reveals that Hogan did challenge whether anyone in Maryland had ever been killed by a bump stock, but he did not laugh.