Gov. Lawrence J. Hogan Jr. (R) championed a change in state policy set to take effect next week ― expanded paid parental sick leave for state employees ― but the idea wasn’t his and the Hogan administration’s Department of Budget and Management opposed the bill in the last legislative session.

The governor discussed the measure, Senate Bill 859, which he signed in May, at a cabinet meeting in Montgomery County on Tuesday morning.

“This morning, I’m pleased to announce that we’re expanding parental leave benefits to all state employees. Beginning on Oct. 1, we will be providing all state employees with 60 days of parental leave following the birth of a child or following the adoption of a child under 6 years of age,” Hogan said, to a hearty round of applause. “… By expanding these important benefits and increasing flexibility, our administration is leading by example.”

But Democratic lawmakers were quick to point out that Hogan’s chief contribution to the measure was signing it; Democrats passed the bill through the legislature on largely party-line vote (though a dozen Republicans did support the bill). 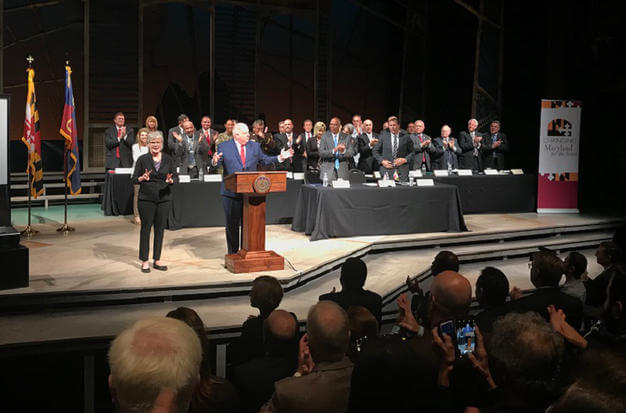 Gov. Lawrence J. Hogan Jr. (R) hold a Cabinet meeting at the Olney Theatre Center on Tuesday. After the meeting, state officials fanned out all over Montgomery County. Photo by Danielle Gaines

Ferguson, chief sponsor of the bill Hogan signed, said he reached out to the Hogan administration early in the legislative session to work together on the measure, but received an opposition letter from the Department of Budget and Management in response.

“There was no withdrawal of that opposition as the bill was being negotiated and passed,” said Ferguson, adding that Democrats waited until the final bill signing ceremony of the session to see if the measure would be signed.

The new policy will expand paid parental leave for Maryland state employees to 60 days after the birth of a child or adoption of a child 6 or younger. After the bill was passed, the Hogan administration implemented policies that allow employees to use the leave anytime within six months after birth or adoption.

On Tuesday, Hogan spokeswoman Amelia Chasse said the Department of Budget and Management’s opposition “was simply due to the fact that the bill was a new spending mandate, which they typically oppose.”

“The governor frequently chooses to support investments he believes in, which he did in this case by signing the bill. The governor never opposed the bill,” Chasse wrote in an email after the Montgomery County event, which took place at the Olney Theatre Center.

In an interview, Budget Secretary David Brinkley said the support or opposition for a bill from a funding perspective is different from the governor’s decision to support or oppose the underlying policy. When policies are adopted, the budget office figures out how they should be funded, Brinkley said.

But the opposition letter from the Department of Budget and Management focused heavily on the underlying policy.

In addition to protections under the Federal Family and Medical Leave Act, “State employees within the State Personnel and Management System currently enjoy a very generous paid leave package, including paid annual (vacation), sick and personal leave,” the letter states.

State employees receive up to 15 days of sick leave annually, six personal days, and between 10 and 25 days of vacation each year.

Regarding the state’s budget, the letter reads simply that the fiscal effect of the bill was “indeterminate, as there is no way to determine how many employees would need to use leave. The additional leave increases overtime expenditures in agencies with 24/7 operations.”

Democrats have criticized Hogan for taking credit for their work in recent days.

“I only wish that the governor had given the credit to the General Assembly for all the things that we did that he signed his name on today and claimed credit for,” Cullison said.

“Today’s announcement is sadly the latest example of misleading hypocrisy from a governor who has failed to deliver progress for working families,” Jealous said. “I want to thank the Democratic legislators in the General Assembly who, despite Larry Hogan’s opposition, passed this law to require his administration to expand parental leave for our state workers.”

Jealous said he would champion additional measures if elected governor, including increasing pay for state employees.

Hogan said Tuesday that, if reelected, he would introduce legislation in the next General Assembly session to create a tax credit to incentivize small businesses to offer paid parental leave for their employees. The legislation would build on a tax credit passed last year for small businesses that offer paid sick leave, and Hogan’s proposal would double the financial benefit for businesses that offer both paid parental and paid sick leave.