Hundreds of donors who contributed to former Gov. Martin J. O’Malley (D) between 2007 and 2011 are financially backing Republican Gov. Lawrence J. Hogan Jr. as he seeks a second term, according to a Capital News Service analysis of campaign finance records.

Donors now favoring Hogan after backing a Democratic governor may be one of several signs that not only Republicans, but also some Democrats, could cast ballots for Hogan in November.

Hogan has held a double-digit lead in several polls, including last week’s Goucher Poll that put him ahead of Democratic opponent Benjamin T. Jealous by 22 points.

“There are Democrats that aren’t comfortable with Jealous and are more comfortable with Hogan, and this speaks to that. It’s not just office holders — it’s donors as well,” said Todd Eberly, an assistant professor of political science at St. Mary’s College of Maryland. 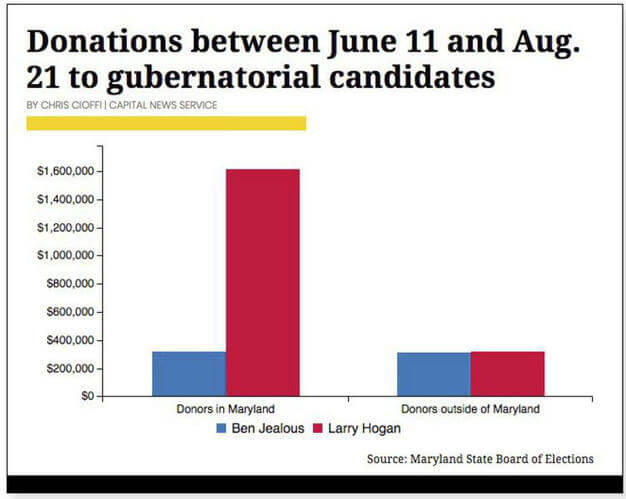 The Goucher poll found that more than half of registered Democrats and nearly three-quarters of registered independents surveyed approved of Hogan’s job performance. A majority of polled Marylanders also said they supported positions generally found in Democratic platforms.

They disapproved of President Trump’s performance and supported policies like the Affordable Care Act, a $15-per-hour minimum wage and legalization of recreational marijuana.

Overall, Hogan has raised more than 10 times what his Democratic counterpart has raised.

August filings with the Maryland Board of Elections showed that Jealous had less than $300,000 in the bank, and Hogan had roughly $8 million in cash on hand. Those poll numbers could indicate Jealous isn’t being heard by voters, said John Dedie, a political science professor at the Community College of Baltimore County.

Hogan has spent more than $1 million on advertising since June, according to campaign finance documents. Jealous spent about $130,000 on ads during the primary, but since then he has spent very little on ads, documents filed in late August showed. The Jealous campaign received nearly half its cash between June 11 and Aug. 28 from donors that didn’t live in Maryland, elections data showed. About 80 percent of Hogan’s funds came from Maryland donors.

Jealous has touted progressive agenda items in his bid for the governor’s mansion, promoting plans like health care for all, criminal justice reform, raising teacher salaries and cutting the sales tax. Registered Democrats outnumber Republicans by 2-1 in Maryland, and the Jealous campaign hopes its themes will turn out progressive voters in droves.

But moderate Democrats and unaffiliated voters may be turned off by the agenda, Eberly said. “If you are a more conservative Democrat, I don’t know how much you would embrace the idea of reducing the prison population or a single-payer healthcare system,” Eberly said.

Asked for comment, Hogan’s campaign spokesman Scott Sloofman said: “Just like countless other Democrats who are supporting Governor Hogan, even ardent Martin O’Malley supporters and donors, have come to the conclusion that Ben Jealous’ plans are too extreme for our state.”

The Jealous campaign declined to comment on this story, but it commented on the Goucher results vowing to stick to its message and arguing that the poll underestimates voter turnout.

Kevin Harris, senior adviser to Jealous, said in a statement that some voters are still undecided, and pointed out that Hogan was also down in polls before Election Day 2014. A quarter of the people surveyed told Goucher they could still change their minds.

“In the next seven weeks, we will win over the voters we need for victory by communicating that winning message through Election Day,” Harris said, noting that future spending on advertising could turn the tides in Jealous’ favor.

Former Baltimore County Del. Richard Rynd (D) said he supports the Republican because Hogan’s policies are more realistic and affordable than those advocated by Jealous.

Rynd supported O’Malley during his first run for governor, but said he soured on the Democrat during his reelection bid. “He raised taxes to the point where it was no longer appreciated by the population in the state of Maryland,” Rynd said.

Former Senate Finance Chairman Jim Simpson (D), 87, donated $4,000 to O’Malley’s campaign, according to Board of Elections data. The Democrat said the donation was a favor to a friend fundraising for O’Malley, but Simpson didn’t vote for him. The Democrat also gave Hogan $1,250, and continues to support the Republican.

“He’s done one heck of a job,” Simpson said.

Hogan has publicized Simpson, Rynd and a group of other mostly older, male and white lawmakers as part of a strategy to woo Democrats.

“They’re sending a message that it’s OK for a Democrat to vote for Hogan,” Eberly said.

The Republican candidate for the 6th Congressional District, Amie Hoeber, and her husband Mark Epstein both gave $500 to O’Malley in 2010. The couple donated more than $5,000 to Hogan.

Epstein has poured millions of dollars into supporting his wife’s bid for Congress. The candidate said she gave to O’Malley at a function hosted by a neighbor without any intent for supporting the Democrat, or any Democrats.

“The last time I supported a Democrat was 1972,” Hoeber said. “I’m a Reagan Republican.”

Some Democrats running for office have tried to distance themselves from Jealous.

Baltimore County Sen. Katherine A. Klausmeier was criticized by her opponent, Del. Christian J. Miele (R), after a mailer sent by the Maryland Democratic State Caucus Committee implied that she was endorsed by Hogan.

Another Democratic senator, James N. Mathias Jr., has distanced himself from Jealous, and touted his relationship with Hogan.

Hogan ran for his first term against then-Lt. Gov. Anthony G. Brown (D) using public funds. That meant Hogan received $2.6 million from a fund financed by taxpayers that contribute voluntarily as part of state income taxes. The Republican lagged in polls before Election Day and ran a lean campaign compared to Brown, who spent nearly $9 million in the primary alone.

Hogan raised over $1 million after being in office for only two months. At least 60 of those donations came from people who had also given to O’Malley, elections data showed. By the end of his first year as governor, Hogan raised more than $2.8 million, data showed. Some of those donations undoubtedly were intended to make a good impression with the new governor, and hope to make that good will continue, Dedie said.

Unless Jealous can motivate the base of progressives he’s counting on for a victory, his window for victory is continuing to narrow, Dedie said.

“Do you want to give a guy a thousand dollars that’s not going to win?” Dedie said. “People will back a winner.”