Keep them guessing. That’s what Amazon Chief Executive Officer Jeff Bezos did on Thursday night during an appearance at The Economic Club of Washington, D.C.’s 32nd anniversary dinner.

“I believe in the power of wandering. All of my best decisions, in business and in life, have been made with heart, intuition, guts … not analysis,” Bezos said, early in an interview with Economic Club Chairman David Rubenstein, the co-founder of The Carlyle Group. After Bezos continued to speak for a couple minutes about his recently unveiled philanthropic efforts, Rubenstein brought up the one issue that was on the mind of everyone in the room.

“When you use intuition to make decisions … where is the intuition leading you now on your second headquarters?” Rubenstein asked, prompting merry applause from the assembled crowd. They hailed from the halls of power in D.C., Maryland and Virginia, three of 20 communities vying to become the home of Amazon’s HQ2, which promises 50,000 new jobs and construction spending of more than $5 billion. 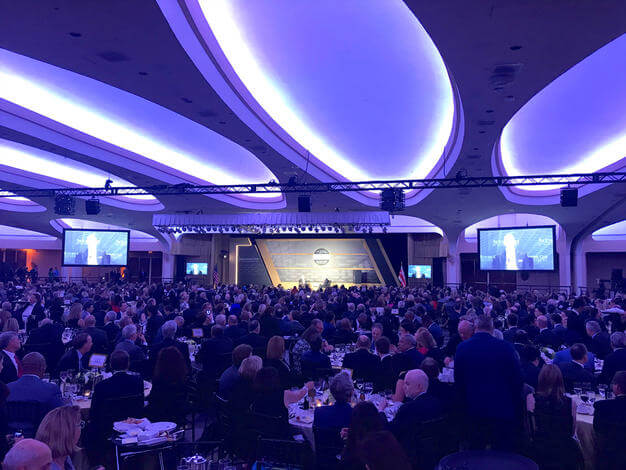 A packed ballroom at the Washington Hilton listens to Jeff Bezos Thursday night. Gov. Lawrence J. Hogan Jr. sat across from the Amazon CEO at the dinner. Photo by Danielle E. Gaines

Bezos at first balked, as the crowd immediately hushed to take in his response.

“Can we just take a moment to acknowledge that that may be the best segue? … Seriously, David, that is amazing,” Bezos said, rousing the crowd at the Washington Hilton again. And then he balked again, reiterating the company line that a decision on HQ2 will come by the end of this calendar year.

“The answer is very simple. We will announce a decision before the end of this year. We’ve made tremendous progress. The team is working their butts off on it and we will get there,” Bezos said.

The confirmation lifted the suspense of a potential surprise announcement less than 15 minutes into what became an hour-plus-long chat. Excitement coming into the evening had been bolstered by an Amazon board meeting in the city this week and the company’s entry into the D.C. Chamber of Commerce. Maryland Gov. Lawrence J. Hogan Jr. (R) sat across from Bezos during a dinner before the interview with Rubenstein, but didn’t leave with any inside information on the forthcoming HQ2 decision.

“The whole thing was very interesting, but we didn’t get any answers like you are thinking of,” Hogan told Maryland Matters. The governor said he was able to speak a bit with Bezos during the dinner, but “not in any great detail” about the company’s decision-making process.

As Bezos greeted guests and was captured in the background of many a selfie, Hogan was briefly visited by Maryland Comptroller Peter V.R. Franchot (D), who attend the evening with his wife, Anne Maher, at the invitation of friends. On his way in for the evening, Franchot said he’d make Bezos an offer if they were able to speak face-to-face. “I would tell him that I’ll give him my right arm if he moves to Maryland, that we would really appreciate it and want him to come,” Franchot said. “…The deal would be a wonderful game changer and would elevate us nationally, improve the state’s business reputation and be a just fantastic development. He’s obviously interested and we’re the perfect place. …I emphasize Maryland and not Virginia. As much as I love Virginia.”

Bezos’ answers to other questions during the interview gave additional insight into how he makes decisions. He initially located Amazon — once called Cadabra, though the moniker was dropped for its discordant similarity to the word cadaver — in Seattle because it was the home of Microsoft and, thus, a workforce with technological savvy. And, at the time, the largest book warehouse in the world was also nearby.

Bezos said he bought The Washington Post in 2013 not because it seemed like a sound business decision, but because he believed in the power of the newspaper as an American institution.

Bezos crowdsources a lot. The $2 billion philanthropic investment in education and housing for homeless families that he announced Thursday stemmed partly from the 47,000 responses he received after asking for ideas on social media. He also crowdsourced Amazon’s expansion in the early days, emailing 1,000 random customers about what other goods the company should offer beyond the early inventory of books, music and movies.

Ultimately, Bezos said, what guides him is the future. When he reaches old age (he’s now 54), “I want to have minimized the number of regrets that I have in my life. And most of our regrets are acts of omission, things we didn’t try, it’s the path untraveled, those are the things that haunt us,” he said.

Hogan and Franchot were not the only dignitaries on hand to hear Bezos speak. D.C. Mayor Muriel Bowser (D) was there, along with three former District mayors, in addition to other city officials. Virginia Gov. Ralph Northam (D) was tied up with Hurricane Florence preparations Thursday night, but the state’s economic development director was sent in his stead. Also present in the 1,400-guest crowd were federal officials and more than a dozen foreign ambassadors, the evening’s glitzy guest list made all the more obvious by not-so-clandestine security details lining the outer edge of the ballroom.

One thing that didn’t come up during Bezos’ interview was evident amid the long lines of tinted-windowed SUVs outside: protesters against Amazon’s bid to locate a headquarters in the region. The small band of activists and union workers criticized Bezos’ amassed wealth and said workers at his company faced unnecessary financial strife. They thumped plastic buckets and chanted phrases like, “Jeff Bezos head to the moon, we don’t want you anytime soon!” and “Jeff Bezos, rich and rude, pay your workers like you should!”

Rubenstein’s interview with Bezos was the 110th such conversation he’s hosted at the Economic Club and his interviewing prowess was lauded before the evening began in a recorded message from billionaire Warren Buffett. “One way or another, he gets you to enjoy and learn from the people he interviews,” Buffett said.

Other bits of information shared by Bezos, who is the world’s wealthiest man, during the meeting:

ON THE POST: While Bezos said he doesn’t feel the need to defend Amazon from some of President Trump’s attacks, he does defend The Washington Post. “We live in a society where it’s not just the laws of the land that protect us. It’s also social norms that protect us. And every time you attack that, you’re eroding it a little bit around the edges,” he said. Bezos said public figures don’t like every headline or story about them, but they should take scrutiny constructively. “It is really dangerous to demonize the media. It is dangerous to call the media lowlifes, it is dangerous to say that they are the enemy of the people,” he said. Rubenstein asked whether Bezos has had discussions with Trump, who has also questioned Amazon’s use of the U.S. Postal Service in addition to his repeated accusations of “fake news.” “I’ll keep my conversations with the president to myself,” Bezos said. “But, yes, I’ve had a couple of conversations with him.”

ON REGULATION: Bezos said big companies, while they should be regulated, should not be vilified. While it’s important to invest in small businesses and maintain a start-up mentality, “nobody in their garage is going to build an all-fiber fuel-efficient Boeing 787,” Bezos said. The world would be worse off without Boeing, Apple, Samsung and their lot. Bezos said Amazon is so inventive, whatever regulations are promulgated, the company will continue to serve customers.

ON SPACE TRAVEL: Bezos said he believes the world’s future hinges on conservation on Earth and colonizing space. He plans to pour money into his rocket company, Blue Origin, which will have a budget of more than $1 billion next year. Asked whether he will give the bulk of his wealth to philanthropic efforts, Bezos said he was unsure because he intends to invest deeply in Blue Origin. “I want to build space infrastructure so that the next generations of people can use that infrastructure the same way I used UPS and FedEx and so on to build Amazon,” Bezos said.

ON PUTTERING AND SLEEP: Bezos starts work meetings each day around 10 a.m., late by some standards, but at a time when his mind is sharp. “I like to putter in the morning,” said Bezos, who takes time to read news and sip coffee each morning while his kids eat breakfast. “…My puttering time is very important to me.” Bezos schedules his most intense meetings first in his work day and prioritizes getting eight hours of sleep most nights to keep his mind sharp. “As a senior executive, you get paid to make a small number of high-quality decisions. …If I make three good decisions a day, that’s enough,” Bezos said.