The long-simmering, barely concealed feud between Maryland’s Republican governor and Democratic-controlled General Assembly boiled over Wednesday, when the Senate attempted to ramrod through legislation that would take the annual “beg-a-thon” for school construction money out of the hands of the Board of Public Works.

The legislation, approved by the House of Delegates and put on the fast track by Senate leaders, would move control of as much as $400 million out from under the Board of Public Works – the state’s three-member spending panel of the governor, comptroller and treasurer – and place it under a new nine-member Interagency Commission on School Construction.

The legislation was seen as an unabashed play to remove Comptroller Peter V.R. Franchot, a Montgomery County Democrat frequently allied with Gov. Lawrence J. Hogan Jr., from the board and strip the governor of direct power over school construction money each year.

“It’s politics, and it’s a personal vendetta against my colleague, the comptroller,” Hogan said Wednesday at a meeting of the Board of Public Works, postponed from last Wednesday because of snow. 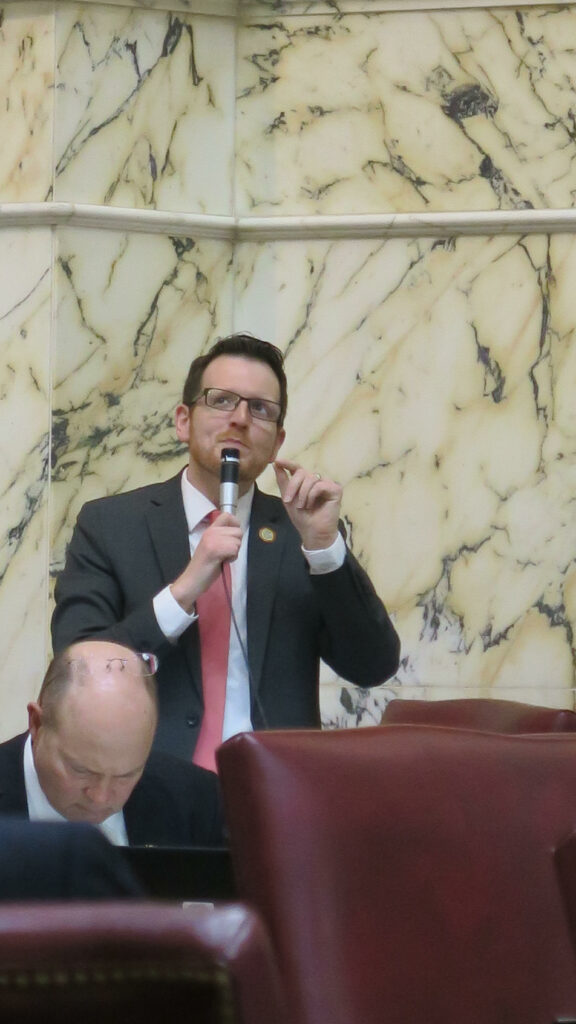 Sen. Justin D. Ready during debate Wednesday on an amendment to the school construction bill. Photo by William F. Zorzi

Meanwhile, a floor below, on the first level of the State House, the Maryland Senate was readying itself to take up the question of House Bill 1783, which the House of Delegates had sent over after a 92-48 vote Tuesday.

The trouble was, the House bill was still in the Senate Rules Committee Wednesday morning; so the legislation was quietly referred to the Budget and Taxation Committee on the floor by Rules Chairwoman Katherine A. Klausmeier (D-Baltimore County).

“We had a whopping one bill yesterday that we voted on, and it is going to the proper committee for a hearing,” Klausmeier told the Senate.

Shortly thereafter, members of Budget and Taxation abruptly left the floor for a meeting in the Senate Lounge, where, it only later became apparent that the committee voted 10-3, along party lines, to approve the 53-page measure and send it to the full upper house.

Senate Republicans were not buying that explanation.

“This is so offensive, colleagues, that such an impactful bill, such a significant bill in its current posture was not presented to the public for their input,” said Sen. Robert G. Cassilly (R-Harford).

The bill, sponsored by Del. Adrienne A. Jones (D-Baltimore County), was amended late in the game by the House, which made no secret of the new provision to bypass the Board of Public Works in the award of school construction money.

The changes appeared to coincide with the open warfare reported in the press late last week between Franchot and Senate President Thomas V. Mike Miller Jr. (D-Calvert). During that skirmish, Miller made it clear he had little use for the comptroller and his “bro-mance” with Hogan, as well as other grandstanding.

Since the House bill was amended last week, Senate Republicans have been preparing for a floor fight and pelted the floor leader, Sen. William C. Ferguson (D-Baltimore City), a member of Budget and Taxation, with questions.

“This thing is on the rocket docket to get out of here,” said Sen. J. B. Jennings (R-Harford), the Senate minority leader. “I mean, it is flying at ludicrous speed, and I guess the question is why?”

The answer is as simple as this: Senate leadership is working toward giving final approval to the House bill Thursday and sending it no later than Friday to Hogan, who has vowed to veto the legislation. Under the time constraints of the Maryland Constitution, the vetoed bill could be returned to the General Assembly for a possible override before it adjourns Monday, April 9. 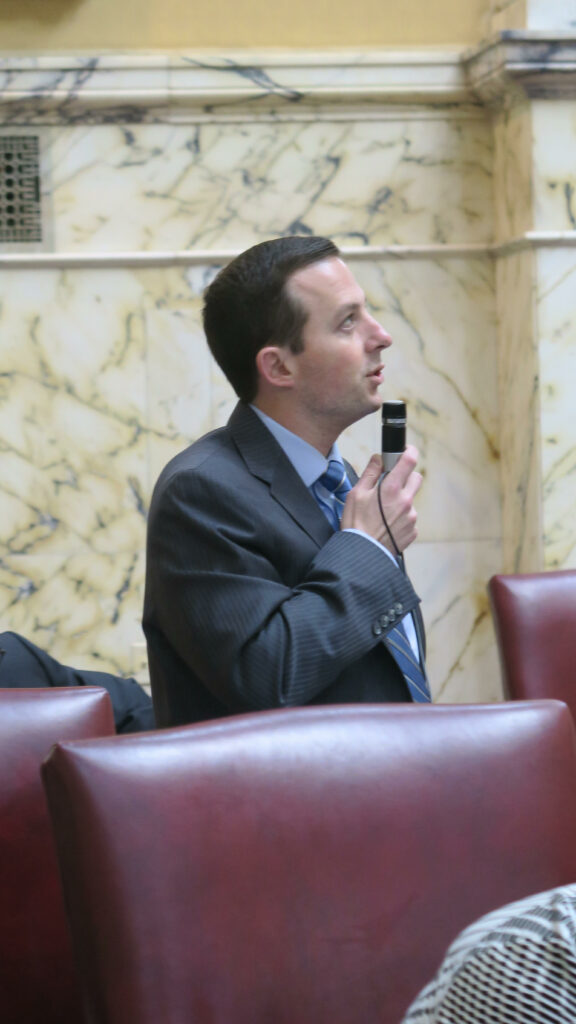 But that scenario could become problematic, since Sen. Nathaniel T. Oaks (D-Baltimore City), who is under federal indictment on political corruption charges, resigned Wednesday night from the Senate, further reducing an already tight vote margin available to Miller for a veto override.

To override the governor’s veto, the Maryland Constitution requires a three-fifths vote in each house, which translates to a minimum 29 votes in the Senate. Fourteen of the 47 senators are Republicans.

Ferguson started off Wednesday detailing the bill and its major provisions, most of which are based on the recommendations of the 21st Century School Facilities Commission — known as the Knott Commission after its chairman, Martin G. Knott Jr. — in its two-year study of the state’s school construction program.

The bill, Ferguson said, would:

“The purpose of this bill is to create a merit-based, nonpartisan system that’s focused on delivering local priorities,” Ferguson said.

Under the bill, the governor technically would control four votes on the new nine-member Interagency Commission on School Construction, which would be responsible for awarding school construction funds to the state’s 24 jurisdictions, and he’d have major influence over a fifth.

The commission members under the governor’s direct control would be the secretary of Planning; secretary of General Services; and two members of the public. The state schools superintendent, who is hired by the state Board of Education, which is appointed by the governor, would also serve on the commission.

Much of the bill was favored by both Democrats and Republicans in both houses. But removing the Board of Public Works from the process was the deal breaker for the GOP members.

Some of the most compelling comments Wednesday came from Sen. Nancy J. King (D-Montgomery), who recalled her days as a long-time school board member coming to Annapolis to appear before the Board of Public Works.

“Probably one of the most painful experiences that any superintendent went through each year was coming to Annapolis for the beg-a-thon,” King said. “It was the most degrading experience — I don’t care who the governor was — for them to have to come here and beg for money for their schools.

“The superintendents can’t speak out about it because they don’t want to get on anybody’s bad side,” she said. “But it’s not just for this governor; it was for any governor that we had, that your beg-a-thon was just a horrendous experience for all of them.”

The partisan drumbeat started early Wednesday, when Douglass V. Mayer, Hogan’s director of communications, sent out a government e-mail to members of the press at 7:30 a.m., as the faux façade of the governor’s much-touted bipartisanship melted away.

The subject line of the press missive was “Just when you think you’ve seen it all.”

“There is an old saying in Annapolis that goes something like this: ‘Why does the General Assembly do anything? Because they can,” Mayer wrote in the e-mail. “That about sums up this sad and pathetic situation.”

He went on to rail against Miller, House Speaker Michael E. Busch (D-Anne Arundel), and Del. Maggie L. McIntosh (D-Baltimore City), chairwoman of the House Appropriations Committee who amended the House bill to include the changes related to the Board of Public Works (BPW).

“Some of these people seem to be mad that the BPW publicly holds people accountable for rank incompetence or the failure to properly safeguard taxpayer dollars,” Mayer wrote. “Some of them are also mad about the governor and the Comptroller pushing for HVAC units to be installed in Baltimore County and Baltimore City schools that lack central air – their opposition to which has never made any sense, political or otherwise.

“What they all agree on, however, is that they really don’t like Comptroller Franchot (See Miller incoherent tirades) and have publicly admitted that this is some kind of weird revenge play against him,” Mayer wrote. “Talk about middle school playground politics….”

The e-mail also contained background information and links to earlier newspaper and website articles about the Miller-Franchot feud, changes to the school construction funding process and Hogan’s description of the legislation as “outrageous” and his promise to veto the bill if sent to his desk.

Mayer’s comments were typical of a daylong assault on Democratic leaders first by Republicans in the administration and then later on the Senate floor.

His e-mail was followed a few hours later by an e-mail from the governor’s press office warning of “Smoke-filled Room Alert” topped by a comic drawing of high-hatted men sitting around a table with drinks and paper before them, most, if not all, smoking cigars, nearly obscured by the heavy smoke in the room.

It, too, included additional links to the legislation and earlier articles about the flap.

In the second Senate session Wednesday night, members of the Senate Republican Caucus offered 18 amendments, and all were rejected in the nearly two-hour session.

The measure is up for final vote on Thursday.