Hoyer’s congressional district takes in most of outside-the-Beltway Prince George’s, and he has been a fixture in county politics for half a century. 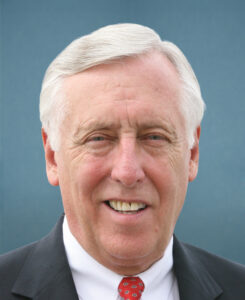 “His list of accomplishments in Prince George’s County don’t begin to capture what a deeply good man he is,” Hoyer said in a statement. “A man who chose to work with grassroots community development in D.C. after he graduated from law school. A man who made communities safer and improved the lives of families in Prince George’s County through his impressive term as County Executive. A man who consistently chooses what’s best for his constituents over what’s best for his political career. Rushern Baker is the kind of leader Maryland needs.”

Baker in turn said he was “honored and humbled” by the endorsement.

Hoyer, the No. 2 House Democrat, joins U.S. Sen. Chris Van Hollen, Attorney General Brian E. Frosh and Montgomery County Executive Isiah Leggett as high-profile backers of Baker, who is emerging as the favorite of the party establishment in the seven-way Democratic gubernatorial primary.

But while Baker has big-name Maryland Democrats, one of his opponents for the gubernatorial nomination, Baltimore County Executive Kevin B. Kamenetz, has a bigger superstar in his corner – at least for a night. Kamenetz will be joined at his campaign headquarters in Pikesville Tuesday evening by Khizr Khan, the Gold Star father who stole the show at the 2016 Democratic National Convention with his denunciations of Donald Trump’s anti-Muslim rhetoric.

Khan famously took out a pocket copy of the U.S. Constitution during his speech and offered to loan it to Trump.

According to an advisory from Kamenetz’s campaign, Khan and Kamenetz will be discussing protecting immigrants’ rights and “the role leaders play in standing up for our communities.”

Speaking of the position of Baltimore County executive, Alfred W. Redmer Jr., the state insurance commissioner who is seeking the GOP nomination for county exec, announced Monday that two Baltimore County businesswomen would serve as finance co-chairs of his campaign.

“With their help, we are going to run the most competitive race for County Executive in a generation, and give voters a real choice in November,” Redmer said in a statement.

He is squaring off against state Del. Patrick L. McDonough in the Republican primary for county executive.

The U.S. House adopted rules for the 118th Congress on Monday, though several of the concessions Speaker Kevin McCarthy made with more conservative members…