Police departments across Maryland face challenges in the recruitment and retention of officers. One in eight positions in the Maryland State Police is vacant, according to their most recent budget report. Local police and sheriffs’ departments are struggling to find qualified, committed candidates. Even after potential officers are recruited and trained, we should consider the ethnic background and language skills of our ever more diverse communities.

Meanwhile, every day, women and men who are not yet American citizens put on their uniforms, pick up weapons, and put their lives on the line  as members of our armed forces.

When they get home and want to bring their talents and experience to their local communities, they face a formidable barrier. These permanent legal residents of the U.S. have served with honor, but they are not yet citizens. Currently, that means they are not eligible for one of the most important jobs in government – as local police officers. That’s because Maryland law requires applicants to be citizens. 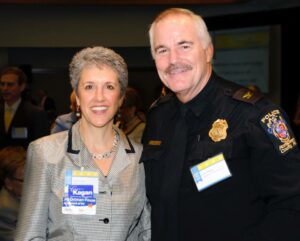 We are working together to remove that barrier. Senator Kagan has sponsored legislation (SB 344) to enlarge our pool of prospective recruits, which Chief Manger is endorsing. Honorably discharged legal permanent residents would still need to qualify on all other evaluations, tests, and background checks, but the door would be open to this modest, common sense, reasonable, way of making our communities safer. In deference to local control, this legislation does not compel any department to hire a legal permanent resident; it merely provides the option.

This proposed policy is an important step in the evolution of modern police departments. Over the years, requirements for being a police officer have changed. Qualifications codified by the Maryland Police Training Commission over the past 50 years have evolved. Gender, height, and sexual orientation restrictions have been removed. We, along with many of Chief Manger’s law enforcement colleagues, believe that one’s citizenship status is a similarly outdated qualification. Instead, the focus should be on one’s knowledge, skills, commitment, and ability to perform the job effectively.

As honorably discharged veterans, these potential applicants have demonstrated an allegiance to the United States. They have also undergone security checks and extensive training. Their spirit for service is unquestioned.

In the past, many veterans were able to earn citizenship during their military service, though it wasn’t always easy. Unfortunately, it has become even more difficult as the Trump administration has curtailed the programs that offered the citizenship option.

We await action in the General Assembly to approve Sen. Kagan’s bill. Forty-one of 47 senators signed on as co-sponsors. We commend the House of Delegates for offering preliminary approval of the companion measure sponsored by Dels. Carlo Sanchez, Joseline Peña-Melnyk, and others.

We are under no illusions that this will end the shortage of dedicated police officers. Even if every honorably discharged legal permanent resident were to apply, we would still be searching for qualified people. But the need for potential officers, especially from diverse backgrounds, must be addressed, and this is a population we’re ignoring for no justifiable reason. It’s time to tear down this barrier to service.

Tom Manger is chief of the Montgomery County Police Department. Cheryl C. Kagan, a Democrat, is the state senator from District 17, representing Rockville and Gaithersburg.