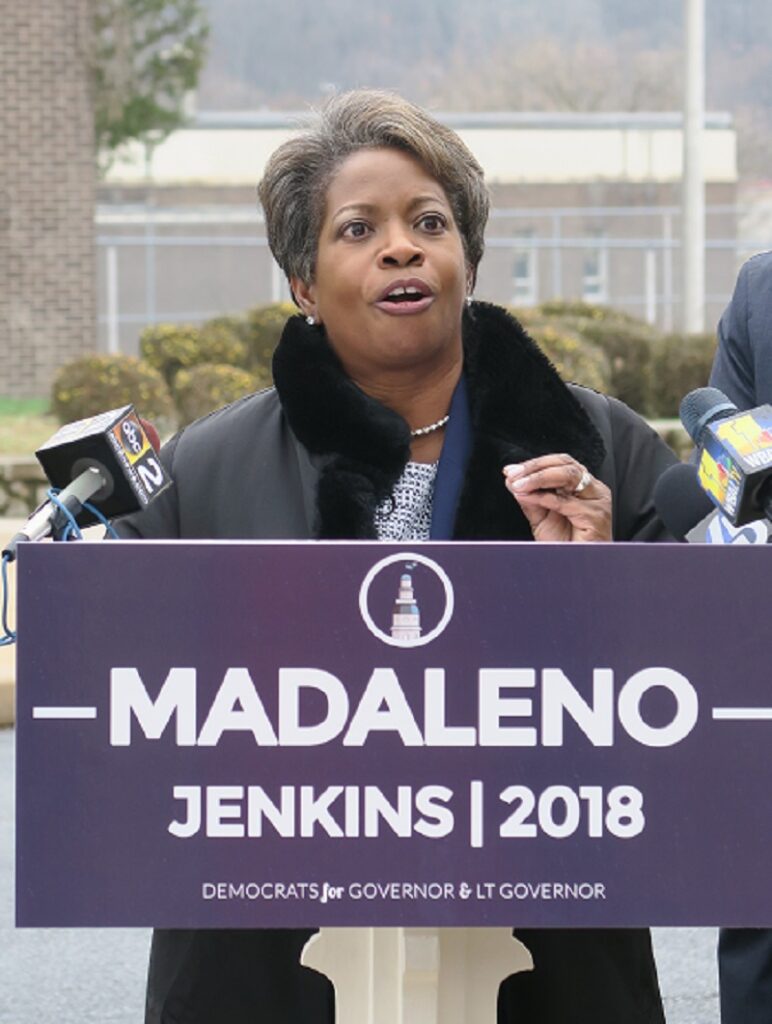 Jenkins stood with her family outside of Western High School, a public all-girls school closed for the Presidents Day holiday, and as Madaleno’s pick for lieutenant governor sketched out the team’s vision for the state of Maryland to a battery of television cameras.

“The Madaleno-Jenkins administration sees a bright future for the state of Maryland, provided that we invest in our greatest resource – which is our people,” Jenkins said. “We want to ensure that we are ready to meet the challenges for the 21st century.”

Jenkins, 55, now a Baltimore County resident, has been a ranking aide to the last three Democratic governors – William Donald Schaefer, Parris N. Glendening and Martin J. O’Malley – and worked in the private sector, most recently as chief operating officer of the Greater Baltimore Committee’s LEADERship program. She has never run for elective office.

“My career has really been spent helping to leverage opportunities for others and helping to make connections that matter for all Marylanders,” she said.

In the announcement Monday, Jenkins ticked off some key points of the ticket’s agenda – for both the state’s rural areas and urban centers – including an enhanced public education system, additional well-paying jobs and a diversified transportation system that moves beyond simply building highways.

She also touched on other ambitious items, such as raising the statewide minimum wage – one of Madaleno’s longtime priorities – ensuring universal affordable health care and affordable prescription drugs for Marylanders, and expanding the earned income tax credit for single individuals.

“I’m thrilled and excited to be on this journey, to share our ideas, to listen to the wonderful people of the state of Maryland, because together, Maryland will be a shining beacon for the rest of the country,” she said.

In introducing his running mate, Madaleno also made a point of noting that both he and Jenkins had been mentored by the late Del. Howard P. “Pete” Rawlings, the powerful West Baltimore Democrat who had chaired the House Appropriations Committee.

“None of the tickets for governor and lieutenant governor have our level of experience in the state government,” he said.

Madaleno, 52, a Montgomery County Democrat who is vice chairman of the Senate Budget and Taxation Committee, has been in the General Assembly for the past 15 years.