In an all but naked effort to undermine Democrats in the Maryland General Assembly, Republican Gov. Lawrence J. Hogan on Wednesday announced his version of “lockbox” legislation to earmark all state casino revenues for schools, above what now is budgeted under funding formulas in the law.

Hogan’s proposal comes on the heels of similar legislation proposed by Senate and House of Delegates leaders in December, and endorsed last month by the legislature’s presiding officers — Democrats all — that would amend the Maryland Constitution to require the state’s share of casino money from slots and table games go to education funding and supplement what is already required. 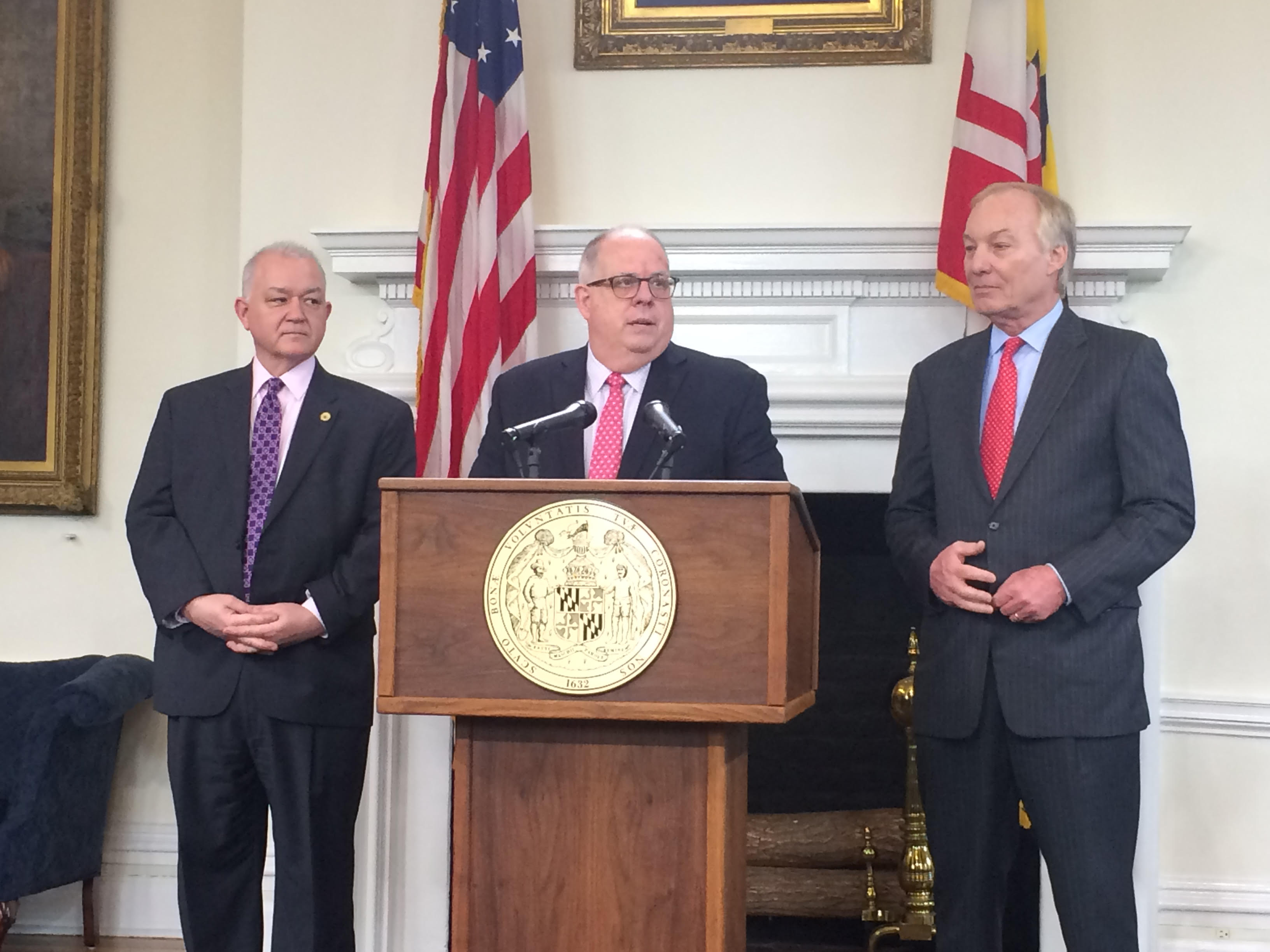 “We’re here today to propose creation of a lockbox for education funding to ensure that casino revenues go directly to K-12 education and directly to improving Maryland schools,” the governor said.

The Hogan administration proposal, which was not yet available in written form, would provide an increase in education spending of $4.4 billion over the next 10 years.

“I believe every child in Maryland deserves access to a world class education, regardless of what neighborhood they happen to grow up in,” Hogan said. “Education has always been our administration’s top priority.”

Hogan’s proposal differs from the legislature’s plan in that it would not be a constitutional amendment, and it would specify that $100 million a year — $1 billion over the next decade — in additional money be spent directly on school construction, rather than operating costs.

In making the announcement, Hogan was flanked by David R. Brinkley, a Republican former legislator, now his budget director, and Comptroller Peter V.R. Franchot, a Montgomery County Democrat and close ally of the Republican governor.

In fact, when the Hogan introduced Franchot, he mentioned that it was Valentine’s Day and that he and the comptroller enjoyed a “bro-mance,” which drew laughter from the room.

Hogan and Franchot are two of the three members of the Maryland Board of Public Works, the state’s spending panel, which doles out school construction funding; the third member is Nancy K. Kopp, a Montgomery County Democrat, who is appointed by the legislature.

At no point Wednesday did Hogan mention the pending General Assembly legislation for the constitutional amendment, a bill proposed by Sen. Joan Carter Conway and Del. Maggie McIntosh, both Baltimore Democrats. Like the governor’s proposal, no actual bill has yet been introduced.

In response to a question about whether a constitutional amendment would be better than the simple statute he was proposing in establishing “a lockbox that can’t be picked,” Hogan said: “Yes, some future legislature and future governor could pass a new law that said we’re not going to spend money on education, but I don’t think that’s likely to occur, once we get this legislation done.”

For his part, Franchot did not explain why he favored the governor’s proposal over the one by the legislature. Before running for comptroller, he was a member of the House of Delegates.

“This is a great day for the kids in public schools all over the state of Maryland,” Franchot said. “I’m delighted that this is achieving bipartisan support, and I look forward, Governor, to you and the legislature working out the details of this concept. It is long overdue. Billions of dollars that should have gone into the school system were directed elsewhere.

“I’m delighted to be here to lend my strong support, Governor, for the administration’s bill that will, once and for all, put a lock on casino revenues that have long been promised for education funding,” he said.

Asked for his reaction to the Hogan’s announcement, House Speaker Michael E. Busch, an Anne Arundel Democrat, “I’m glad to see the governor joined the many legislators in the House and the Senate who pledged to put all the gaming money into the lockbox.”

Busch said he believed a constitutional amendment was necessary to ensure the education money was protected from raids during difficult fiscal downturns.

“If you don’t do it as a constitutional amendment, it can be bracketed out of the budget at any time,” he said.

“Our goal is to obviously fund K-12 education at its constitutional level every year and then add to that all the gaming money,” Busch said. “So, we’re very comfortable with our piece of legislation.”

In Hogan’s announcements and press conferences, the governor often makes disparaging remarks about the previous administration — that of former Gov. Martin J. O’Malley, a Democrat — and the legislature of the past, but then quickly calls the matter at hand, whatever that might be, a “bipartisan” issue that requires all parties to work together.

His press office even puts out “Bipartisanship Alert” e-mails regarding the governor’s pending legislation, sometimes with a photograph of Hogan flanked by Busch and Senate President Thomas V. Mike Miller, a Calvert County Democrat, at the top of the missive.

Franchot is frequently available to provide the sheen of bipartisanship.

Yesterday was no different.

“This is a bipartisan issue that the majority of Marylanders agree with,” Hogan said. “The additional revenue that was promised for the classrooms should be required to go into the classrooms.”

The governor recycled a quote from Miller that appeared in a newspaper article about the General Assembly’s lockbox bill last month.

“‘It’s time to keep faith with the people,’” he quoted Miller as saying.

“And we could not agree more,” Hogan said.