The acting U.S. attorney for Maryland is asking the General Assembly’s joint ethics committee to defer any possible action on Sen. Nathaniel T. Oaks until completion of his federal corruption trial, now scheduled to begin in April, after the legislature adjourns.

A brief letter from Maryland’s top federal prosecutor to the chairmen of the Joint Committee on Legislative Ethics was read into the record during Monday night’s Senate floor session, a response to the legislators’ asking whether the ethics investigation would hamper the trial of the West Baltimore Democrat. 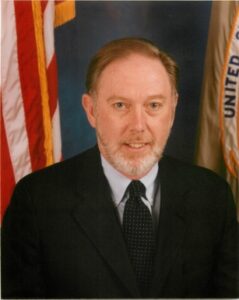 “I believe it would be prudent for the committee to hold its investigation in abeyance until the federal charges are resolved,” Stephen M. Schenning, the acting U.S. attorney, wrote to the ethics panel’s leaders, Sen. James E. DeGrange Sr. and Del. Adrienne A. Jones.

“As you note, the committee has a history of deference to prosecuting authorities with respect to the suspension of the committee’s investigation of such matters,” he wrote.

It was unclear Monday night, however, whether the joint committee had yet reached any decision on whether to suspend its probe of Oaks.

Oaks was first charged last April by federal prosecutors with wire fraud and then charged in a 10-count superseding indictment with fraud and obstruction of justice in November.

After Monday’s session, Senate President Thomas V. “Mike” Miller explained to reporters why he ordered Schenning’s response to the ethics committee – whose investigations and deliberations are generally confidential — read into the record and journalized.

“I’m not privy to the work of the ethics committee,” Miller said. “I waited till they met and gave me what the prosecutor’s response was and quite frankly, it was kind of unprecedented to read it.

Miller wrote to the ethics committee chairmen Jan. 11, asking the panel to take up the Oaks matter, after calls for his removal by a growing number of Republicans, including Gov. Lawrence J. Hogan.

“The governor wants me to oust Senator Oaks – which I don’t have the authority to do and wouldn’t be inclined to do,” pending the outcome of his federal trial, Miller said at the time.

Instead, he referred it to the ethics committee to consider and make a recommendation to the full Senate.

Nine fraud charges against Oaks are related to allegations that he took more than $15,300 in a bribery scheme involving an FBI confidential source posing as a Texas businessman wanting to do business in Baltimore.

A single obstruction count against Oaks stems from allegations that while he was supposed to be cooperating with federal investigators, he tipped off a target in the bail-bonds industry, known only as “Person #1” in court papers, to the existence of a corruption probe.

Federal public defenders representing Oaks last month convinced U.S. District Judge Richard D. Bennett that the lawmaker should be tried on the obstruction charge separately from the fraud case. His trial on the nine fraud charges is scheduled to begin April 16, a week after the General Assembly adjourns.

A trial on the obstruction of justice charge has not been set.