In the Democrats’ weekly address, which coincides with Trump’s first anniversary in office, Van Hollen faulted the president for not focusing early on infrastructure renewal — a frequently mentioned campaign pledge. Instead, he said, Trump pursued policies to “destroy” the Affordable Care Act, weaken America’s response to climate change and enact “a tax scheme” that benefits the wealthy. This will drive up the national debt, he said, “leaving our children and grandchildren to pay the tab. At the same time, the Republican budget paves the way for massive cuts to Medicare and Medicaid.” 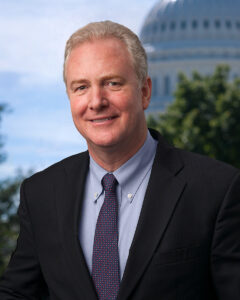 Van Hollen said Trump has offered insufficient response to the nation’s opioid abuse crisis, failed to stand up to Russia for its meddling in the 2016 elections and refused to get tough with China, who candidate Trump often accused of unfair trade practices.  In addition, he faulted the president for “his refusal to denounce white supremacists and neo-Nazis in Charlottesville, Va., to his recent, repulsive comments about certain immigrants, to his attempt to impose a Muslim ban.”

The senator said Democrats stand ready to work with the president on the nation’s challenges, and he praised those who protested the administration’s policies.

“Together, we will defend our democracy from whatever challenges we face.”

Van Hollen, Maryland’s junior senator, was tapped to deliver his party’s response to the president’s weekly address, a high-profile opportunity for a rising star in the party to speak to a national audience as Trump and the White House trumpet what they regard as the administration’s accomplishments.

2018 will be an important year for Van Hollen, who serves as chairman of the Democratic Senatorial Campaign Committee, in charge of candidate recruitment and incumbent protection. The Democrats need to flip just two seats to regain control of the Senate, but it will be a formidable task. The Democrats are only on offense in three states at the moment, while they are defending 10 seats in states Trump won in 2016 – some of them handily.

When he served in the House, Van Hollen was chairman of the Democratic Congressional Campaign Committee in 2008, when the party picked up more than 20 seats and built on its majority, and in 2010, when it lost a historic 63 seats and ceded control to the GOP.