But with Republicans fully in charge of Congress and controlling a majority of governorships, Frosh and his fellow Democratic attorneys general are at the vanguard of the “resistance” to President Trump and his administration.

This phenomenon was on vivid display in Annapolis on Thursday, as Frosh and legislative leaders held a hearing on the Trump administration’s plans to repeal the Clean Power Plan, President Obama’s signature initiative to reduce greenhouse gas emissions at power plants.

Frosh and many of the scientists, economists, elected officials and activists who testified focused their ire on Environmental Protection Agency Administrator E. Scott Pruitt, whom they described as biased and lawless. 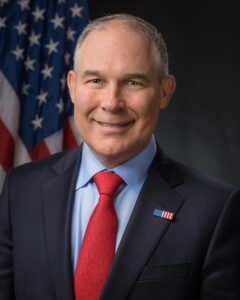 “He made up his mind when he sued EPA,” Frosh said. “He is undeniably biased.”

“The reality is that if the Democratic attorneys general did not step up and challenge, or at least call into question, some of the actions of the Trump administration, who else would?” said former Maryland Attorney General Douglas F. Gansler (D), whose current legal practice focuses on attorneys general of both parties.

Thursday’s hearing was in fact one of three “people’s hearings” that took place on the Clean Power Plan this week. The other two were held in Wilmington, Del., and New York City, sponsored by the attorneys general in those states.

They were held in conjunction with the State Energy & Environmental Impact Center at New York University School of Law. The center, which is just a few months old, is dedicated to helping state attorneys general fight against regulatory rollbacks and advocate for clean energy, climate action and other environmental protections. It was largely bankrolled by former New York mayor Michael R. Bloomberg.

Frosh and several other officials asked EPA to schedule hearings on its plan to scale back or kill the Clean Power Plan, noting that the only official hearing on the East Coast was in the coal-heavy state of West Virginia. But they were rebuffed.

“We’re here because we believe Maryland has a story to tell and that Marylanders deserve to be heard,” Frosh said.

And for 3½ hours, they were. Every single person who testified decried the Trump administration’s plan to debilitate the Clean Power Plan. Raquel Guillory Coombs, a spokeswoman for Frosh, said one person emailed the attorney general’s office this week to signal his support for repealing the Obama rule, which remains in legal limbo.

Frosh said his office would send the testimony along to EPA with the hope that it would become part of the official agency record on the Clean Power Plan.

Many people who spoke cited Maryland’s unique vulnerability to sea level rise, already evident in frequent flooding in the Annapolis historic district, the dramatic erosion of Smith Island and the “thousand year” flood in Ellicott City two years ago.

Dallas Burtraw, a senior fellow at Resources for the Future, a Washington, D.C.-based research institution, said the air quality improvements from the Clean Power Plan as proposed by the Obama administration would result in 100 fewer premature deaths in Maryland every year. But the alternative proposed by Pruitt, he said, would lead to six additional premature deaths in the state.

“It could very well worsen public health and environmental outcomes in the state compared to doing nothing,” Burtraw said.

Maryland, he said, is “not only the Free State, but the Fossil-Free State.”

But even though Gov. Larry Hogan (R) was intimately involved in the decision to ban fracking, he came in for some partisan criticism at Frosh’s hearing Thursday. Two of the Democrats seeking to unseat him – Prince George’s County Executive Rushern Baker and former NAACP president Ben Jealous – showed up to testify.

While Baker spoke about how climate change has impacted his jurisdiction and about the county’s new stormwater management program, Jealous and his running mate, former state Democratic chairwoman Susan Turnbull, offered pointed attacks.

Jealous sought to link Hogan, who has worked to distance himself from the Trump administration, to Pruitt.

The EPA leader, Jealous said, “has become a threat to our state in too many ways and the silence of our governor has frankly put our state at risk.”

Turnbull, whose son David Turnbull is a nationally known climate activist and campaign director at Oil Change International, suggested that “Gov. Hogan’s last-minute scramble” to join the alliance came because he felt pressure from Frosh’s hearing.

“Far too often on the environment, people wind up attacking each other instead of finding solutions,” he said.

Mayer said Maryland’s entry into the alliance will lead to “more collaboration” among the states. Maryland already is part of the Regional Greenhouse Gas Initiative, a nine-state cap-and-trade coalition. Maryland Department of Environment Secretary Ben Grumbles is the chairman of that organization this year.