Maryland State Sen. Nathaniel T. Oaks pleaded not guilty Thursday in U.S. District Court in Baltimore to obstruction of justice, the tenth charge he faces in what federal prosecutors say is part of an ongoing investigation into possible corruption in the General Assembly and Baltimore City Council.

At the same time, attorneys for Oaks argued before federal Judge Richard D. Bennett that the West Baltimore Democrat should be tried separately on the obstruction charge because nine other charges against him are related to allegations that he took money in a bribery scheme.

In filings Monday, Oaks’s federal public defenders argued that the obstruction count stems solely from allegations that while the lawmaker was supposed to be cooperating with federal investigators, he tipped off a target from the bail-bonds industry, known only as “Person #1” in court papers, to the existence of the probe.

Bennett is expected to rule on severance motion as early as Friday. 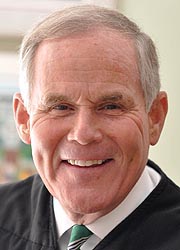 But the judge reportedly admonished Oaks attorneys for saying in filings that the prosecutors’ opposition to a motion for separating the obstruction charge served as a “pre-trial smear job to convict Senator Oaks in the press and to taint and prejudice the jury pool against him by publicly revealing contested evidence and confidential material that have no relation or bearing on the severance question.”

As part of their filing, Lucius T. Outlaw III and Rebecca S. Talbott also included articles from The Baltimore Sun and the Associated Press as evidence of what they called the prosecution’s efforts to present the legislator’s story in “an intentionally skewed manner.”

Bennett upbraided Oaks’ lawyers, saying that nothing in the government filings “warrants that kind of language,” the Sun reported on its website.

“I’m trying to remind you of the civility of our practice,” the Sun reported Bennett as saying. “Senator Oaks is not being treated any differently than any other defendant.”

Meanwhile, Senate President Thomas V. Mike Miller Jr. is expected to send a letter to the Joint Committee on Legislative Ethics by the end of the week, asking the panel to take up the Oaks matter, after calls for his removal by a growing number of Republicans, including Gov. Larry Hogan.

“The governor wants me to oust Senator Oaks – which I don’t have the authority to do and wouldn’t be inclined to do,” pending the outcome of his federal trial, Miller said.

Instead, Miller said, he was referring it to the joint ethics committee to consider and make a recommendation to the Senate.

Oaks’ trial is now scheduled for April, after the General Assembly adjourns.

In 1988, while serving in the House of Delegates, Oaks was convicted of theft and misconduct in office charges for stealing thousands of dollars from his re-election fund. He received a five-year suspended sentence and had to give up his House seat as a result. But in 1994, Oaks was re-elected to the House, where he served until last February, when he was appointed to fill a Senate vacancy.

In December 1999 each man was indicted on 11 fraud counts in a scheme for generating hundreds of thousands of dollars in lobbying fees for Evans. In return, Evans allegedly steered a $10,000 real estate commission to Fulton on the purchase of an Annapolis building for his lobbying firm in 1998.

A jury acquitted Fulton, who has since died, on five counts and deadlocked on six others. He retained his seat in the House of Delegates throughout and after the trial.

Evans was found guilty of nine counts, sentenced to 30 months in federal prison and fined $200,000. He is now, once again, among the highest-paid lobbyists in Annapolis, still with ties to a number of legislators, among them Senate President Miller.

At the time of the Fulton case, Bennett was chairman of the Maryland Republican Party, which caused a bit of a stir among some party loyalists. He had run for Maryland attorney general and lost to J. Joseph Curran (D) in 1994. And in 1998, he ran for Maryland lieutenant governor on a ticket with gubernatorial aspirant Ellen R. Sauerbrey, who that year lost a second time to Democrats Parris N. Glendening and Kathleen Kennedy Townsend.

In 2010, he also presided over the bribery case of state Sen. Ulysses Currie, the Prince George’s County Democrat who once chaired the powerful Budget and Taxation Committee. A federal jury acquitted Currie, who was also represented by Outlaw, the federal public defender.

Currie later admitted to the legislature’s joint ethics committee that he had violated state ethics laws, and the committee recommended that the full Senate censure him. The Senate then unanimously voted in 2012 to strip him of his leadership positions, but allowed him to retain a seat on Budget and Taxation.

At one point in 2016, Currie resigned his seat, effective that Dec. 1, but then rescinded his resignation, saying he would continue in office until the end of his term, next January.