Gov. Larry Hogan’s (R) announcement on Tuesday that he would push for a constitutional amendment limiting state lawmakers to two terms was exquisitely timed: It happened just a few minutes after Maryland Democrats wrapped up their annual pre-session lunch. 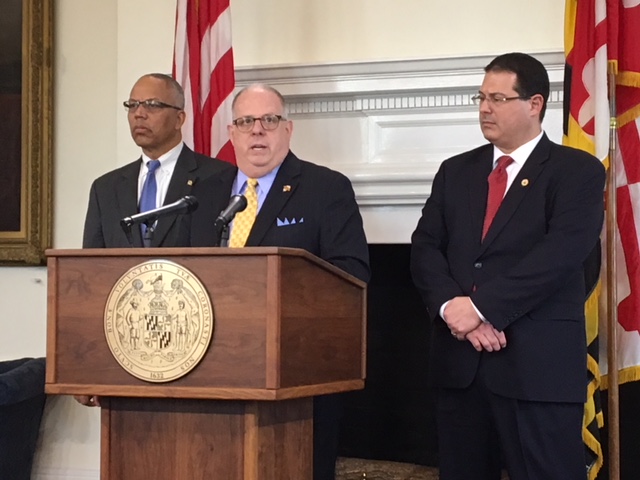 At that lunch, Democrats heard from U.S. Sen. Ben Cardin, who has been in elective office since 1967. And from U.S. Sen. Chris Van Hollen, who has served in the state House and Senate and the U.S. House and Senate, dating back to 1991. And state Senate President Thomas V. Mike Miller Jr., the longest-serving Senate president in the U.S., who joined the legislature in 1971 and the upper chamber in 1975. And House Speaker Michael E. Busch, the longest-serving speaker in Maryland history, who entered the legislature in 1987.

For something different, the Democrats Tuesday spotlighted a handful of lawmakers who don’t get quite as much attention: House Economic Matters Chairman Dereck Davis, who was elected in 1994 and has held the gavel since 2003. And Senate Education, Health and Environmental Affairs Chairwoman Joan Carter Conway, a member of the Senate since 1997 who has headed the committee since 2007 and previously spent two years on the Baltimore City Council. And Sen. Nancy King, a member of the legislature since 2003 who joined the Senate four years leader and previously served eight years on the Montgomery County Board of Education. And Sen. Victor Ramirez, who has represented Prince George’s County in the legislature since 2003. And Del. Joseline Pena-Melnyk, who entered the legislature in 2007 after three years on the College Park City Council.

Well, you get the idea.

But Hogan insisted he wasn’t trying to target incumbent lawmakers – not even Miller or Busch, despite frequently being at odds with them. In fact, a term limit measure, if it passed, would only apply to legislators first elected in 2018 and beyond, the governor said.

A long-term deal to fund the federal government past Jan. 19 seems unlikely, given Democrats’ insistence on a DACA agreement as part of any bargain.

Another continuing resolution of a few weeks or months would avoid a shutdown, and that’s what most stakeholders expect.

Still, one never knows what will happen in Washington these days.

Noted U.S. Sen. Chris Van Hollen (D-Md.): “The only person who has tweeted about a ‘good government shutdown’ is Donald Trump. And he seems, some days, determined to shut down the government.”

It’s not just DACA, the Bush and Obama-era Deferred Action for Childhood Arrivals program, that needs to be in the mix if Republicans want Democratic votes, Van Hollen said.

“This has got to be a package,” he told Maryland Matters Tuesday. “We want to deal with all of these issues.”

To make the immigration discussion even more fraught, the Trump administration’s move this week to phase out the temporary protected status of 200,000 Salvadoran immigrants has many progressives alarmed.

Van Hollen, Sen. Ben Cardin (D-Md.) and Sen. Dianne Feinstein (D-Calif.) have introduced legislation to address the issue, but the bill is not yet bipartisan.

“Many Republicans, at least privately, agree that it doesn’t make a lot of sense to kick people out of the country who’ve been here and [are] playing by the rules, and [who] came here legally. It’s a big hit to many in the business community. Many of these immigrants are small business owners.”

Summing up, Van Hollen said, “The important thing to understand about the budget debate is it’s about all of these issues.”

He got a new committee assignment on Tuesday. He’ll be joining Cardin on the Senate Environment and Public Works Committee and giving up his slot on the Agriculture Committee.

“The EPW Committee has jurisdiction over areas that are central to Maryland’s success and impact every community in our great state,” Van Hollen said in a statement. “I’ve been a strong advocate for the idea that environmental and agricultural interests must work together to succeed, and I will continue to fight for Maryland’s farming community in the U.S. Senate.”

Van Hollen said he will reserve the right to rejoin the Ag Committee the next time there’s an opening, and intends to continue working on the next farm bill, which is slated for passage later this year.

On Tuesday, the labor council’s political arm, the Committee on Political Education, met to consider whether to back Alsobrooks or former U.S. Rep. Donna Edwards for executive. According to a source, Alsobrooks got 17 votes, Edwards got nine, and four committee members abstained. A two-thirds vote is required for an endorsement.

Edwards was expected to get the lion’s share of labor endorsements in the primary, but unions have largely split in the race so far. State Sen. Anthony Muse and former Obama administration official Paul Monteiro also are running in the Democratic primary.

Hours before the start of the General Assembly session, first-term Del. Andrew Platt (D-Montgomery) announced that he would not seek re-election.

Platt, who was just 25 when he was elected, said the decision to step away “is the right one for me professionally and personally.”

“As the son of a mailman and a mom who made minimum wage, I’ve spent my time in office fighting against institutional inertia and structural forces to reform our politics so that working families don’t get further marginalized by unfettered capitalism and the exacerbating social stratification we see happening around us,” Platt wrote on his Facebook page Tuesday night. “Given the corrosive effect of money in politics and the broken incentive structure of who public policy gets made for, I think I will be able to better work on these issues from the outside and not as a state legislator.”

Platt’s decision comes amid rumors, first reported this week on the political blog A Miner Detail, that Rebecca Smondrowski, a member of the Montgomery County Board of Education who had been gearing up to run for a county council at-large seat, was preparing to seek a House seat in District 17 instead.

Beards — not just for millennials 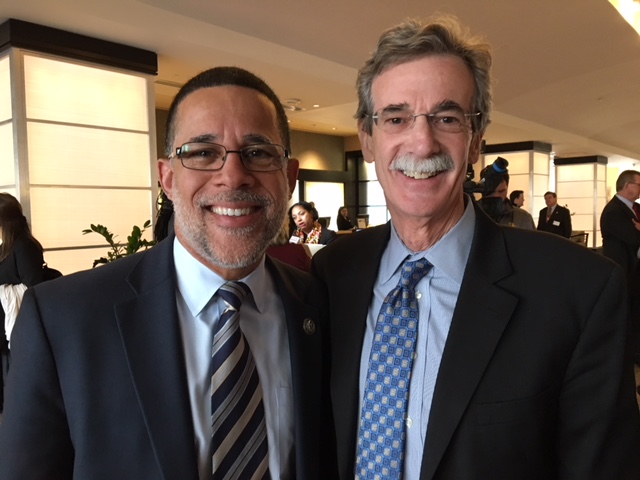 At the Democrats’ pre-session lunch and rally in Annapolis on Tuesday, Brown explained to Maryland’s mustachioed attorney general, Brian Frosh (and a clean-shaven reporter), that he stopped shaving for a few days over the holidays.

Informed by his mother that his brothers also were growing beards, Brown said he decided, “You know what — that’s it.”