A poll set to be released on Monday shows strong support for renewable energy in two battleground state Senate districts – one in Baltimore County and the other on the Eastern Shore.

The survey also shows stark potential electoral implications for candidates in the two districts – which Republicans are targeting this year.

Clean energy advocates are releasing the poll to build momentum for their push to mandate a 50 percent renewable energy portfolio in the state by 2030, up from the current renewable portfolio standard, which mandates 25 percent use of renewables by 2020. Activists are pushing for legislation in this year’s General Assembly session – conceding that the measure is likely to fall short this time – and are securing commitments from candidates for state offices ahead of the November elections to support it in the future. 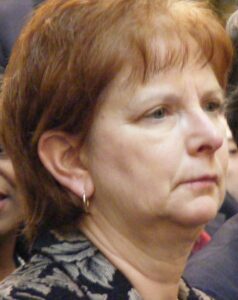 A poll shows Sen. Kathy Klausmeier will profit if she embraces renewable energy.

The poll of 503 registered voters in the two districts was conducted Dec.14-26 for the Maryland Clean Energy Jobs Initiative by OpinionWorks, an Annapolis firm. It had a 6.3-point margin of error.

In eastern Baltimore County’s District 8, which is represented by Sen. Kathy Klausmeier (D), 74 percent of voters said they favored expanding the state’s renewable portfolio standard to 50 percent – and 46 percent of those said they strongly favored the increase. Twenty-three percent of those queried said they opposed an expansion of the RPS.

The numbers were almost identical in the Lower Shore’s District 38, which is represented by Sen. Jim Mathias (D). Once again, 74 percent of district voters said they favored the higher RPS – 43 percent strongly – while 23 percent said they opposed it.

In each district, the pollsters told voters that an increase in the RPS could result in “a cost increase of less than $2 per month.”

“These strong numbers indicate that voters have an appetite, almost an impatience, for renewable energy in Maryland, including in these swing legislative districts,” said Steve Raabe, OpinionWorks’ president.

The numbers in the two state Senate districts were in line with a statewide poll that the firm conducted on renewable energy a year ago. In that survey, 71 percent of Marylanders said they supported a 50 percent RPS – 46 percent strongly – while 20 percent said they opposed it.

The latest poll showed that renewable energy could be a pivotal issue in the two districts, which are held by Democrats but are top Republican targets this election cycle.

The issue could be especially hotly debated in Mathias’ district, where two controversial offshore wind energy projects have been proposed off the coast of Ocean City and are working their way through the approval process. Mathias, a former small business owner in Ocean City, supported authorizing legislation for offshore wind in 2013; Carozza wasn’t in the legislature when the bill passed but is expected to try to use Mathias’ vote against him this year.

In both Senate districts, support for the offshore wind projects as currently proposed was strong: 69 percent in District 8 told pollsters they supported them – 40 percent strongly — while 22 percent said they opposed them. The support was even stronger in District 38, where 72 percent of those surveyed said they favored the projects as currently proposed – 43 percent strongly – and 22 percent were opposed.

In a head-to-head matchup in District 8, OpinionWorks found Klausmeier currently leading Miele, 46 percent to 30 percent. But the candidates’ fortunes change dramatically based on their hypothetical positions on the RPS legislation.

While lawmakers will debate the 50 percent RPS bill in Annapolis this session, another measure is being introduced to convert Maryland’s energy portfolio to 100 percent renewables by 2035. Many mainstream environmental groups believe the 50 percent standard is a more realistic short-term goal.

The House of Delegates gave preliminary approval Friday to a bill that would limit the circumstances under which county health officers can be fired….