It’s funny, when you moderate a political debate and then read about it.

As I write this, I’ve read four stories about Thursday morning’s Democratic gubernatorial candidate forum in Bethesda, sponsored by the Committee for Montgomery, including one by my colleague Bruce DePuyt. I think they all captured the flavor pretty well.

For those of you who sat through the 45-minute forum, or participated in it, and thought it didn’t create enough friction or detail (or news), that’s on me.

The view from the stage is always a little different than the view from the audience, especially in a ballroom with 900 people in it. Eight candidates arrayed in alphabetical order across the stage – that’s a lot. From where I was standing, at a lectern, Prince George’s County Executive Rushern Baker was at most a couple of feet from me; Krish Vignarajah, down at the other end, seemed a mile away. 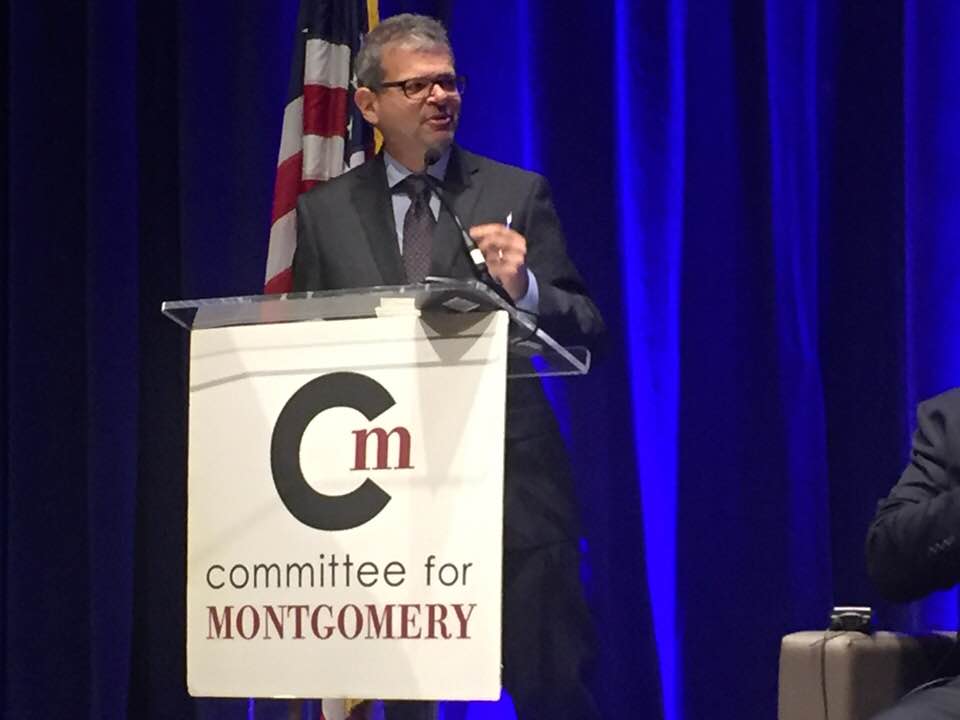 I didn’t listen to some of the answers as closely as I should have and probably should have figured out a way to ask follow-ups. I was checking my notes and thinking about the next question. Or I was watching the time-keepers in front of the stage.

Eight candidates, and 45 minutes. Even Gwen Ifill would have found it challenging. I still came away with a few impressions:

It’s true, as the news accounts suggested, that the candidates agreed on just about everything. But I found some subtle but important differences and developments.

Usually, especially in multi-candidate fields, there’s a knowledge gap between the experienced officeholders and the novices. That knowledge gap this time wasn’t as wide as I was expecting — or as wide as it has seemed at previous candidate cattle calls. Everyone knew enough to speak fluently and fluidly most of the time, though the three elected officials — Baker, Baltimore County Executive Kevin Kamenetz and state Sen. Rich Madaleno — had a slight advantage because they could talk about their experiences addressing the challenges facing the state.

Madaleno, of course, also had the home-court advantage in Montgomery County — and the ability to all but say, brashly but with a straight face, that he knows the problems and solutions at the state and local levels better than anyone else.

Attorney Jim Shea has had enough experience around the state, including stints as chairman of the University System of Maryland Board of Regents and as chairman of the Central Maryland Transportation Alliance, that he can talk about key issues as if he were a seasoned officeholder.

A lot of people got in zingers about Gov. Larry Hogan (R). The one that probably created the most buzz came from Kamenetz, when he complained that Hogan watered down the Purple Line so much that it’s now become the Lavender Line. A good line, yes — but it seemed a little rehearsed.

More striking to me was the warning from tech entrepreneur Alec Ross that Montgomery County is “going to get screwed” by Hogan on the equitable distribution of state school construction funds if he’s re-elected. Ross, in general, seemed to have done his homework, and threw out relevant facts and figures about Montgomery County.

I was interested to observe former NAACP President Ben Jealous’ approach. I’ve heard him at events and rallies in the past where he’s given powerful orations, and laid out broad, Bernie Sanders-like proposals. But this was the first time I’ve really heard him address specific Maryland problems and offer specific Maryland solutions. That shows some signs of maturation as a candidate.

I was also interested that policy consultant Maya Rockeymoore Cummings used two different questions — one on Montgomery County’s role and reputation in the state, the other on traffic congestion — to address climate change and the environment, and I believe she was the only candidate to do so. That’s going to resonate in parts of the state, including Montgomery County.

And Vignarjah’s personal story — as the only immigrant among the candidates — is also going to resonate, especially in Montgomery County.

A lot of people I talked to after the forum – and not just partisan Democrats – came away impressed by the candidates. But Hogan looms large over this field, and his institutional, instinctual and financial advantages over this crew are hard to even wrap your arms around.

Hogan was invited to the forum and chose not to attend. That’s hardly a surprise. Why would he want to give equal billing to the eight people sniping at him and trying to take his job away?

But one of these eight people will emerge as the Democratic nominee come late June. Let’s see if the stature gap closes then.