If Prince George’s County Executive Rushern Baker (D) resented being the 41st* and final dignitary to speak at the recent groundbreaking for the Town Square at Suitland Federal Center project, he didn’t show it.

While waiting his turn at the microphone, Baker laughed at all the inside jokes about county government and he listened as speaker after speaker thanked every person who has ever set foot in Suitland or helped bring the mixed-use project, adjacent to the U.S. Census Bureau, to the starting point.

In fairness, it’s taken 20 years for the county to purchase the parcels of land, knock down dozens of ramshackle post-World War II garden apartments, and arrange the financing for the new homes, retail and offices that will be built on the site over the next couple years, so some acknowledgement of the struggle and celebration of the achievement was completely appropriate.  Still, the event seemed long. 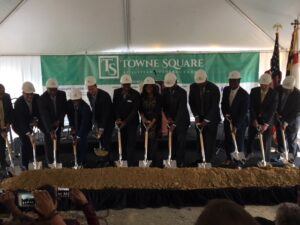 When it was finally his opportunity to speak, Baker, a 2018 candidate for governor, failed to provide the waiting TV cameras the pithy soundbite that captured the project’s essence, sensing perhaps that all the usual stuff had already been said.

Rather than do the traditional political thing — talking about his role in the project — a suddenly wistful Baker redirected the spotlight to a handful of people closest to his heart.

He began by talking about his mentor, former County Executive Wayne Curry (D), who died of lung cancer in 2014. Curry’s love of Prince George’s was like William Donald Schaefer’s love of Baltimore, with a perpetual cocked head and leading jaw that seemed like he was daring you to punch him.

Said Baker: “(Curry) loved (Prince George’s). And he talked about it like there was no other place in the world. It was Wayne Curry who actually put the Revenue Authority together, and the Redevelopment Authority. He understood redevelopment and he understood his community. It was Wayne Curry who invested in Suitland for the first time, when people said, ‘Have you lost your mind?’ But he did it because he understood the opportunities that were waiting. … (H)e understood that if you could do U Street (NW) and H Street (NE in Washington, D.C.), you could do Suitland. He understood opportunity. And I had enough sense to follow that lead.”

Then Baker, a resident of Cheverly, talked about how he came to know and love Suitland:

“My firstborn (Rushern Baker IV), who I love more than life itself, decided he was going to go to Suitland High School. Those who know me know that I’m a nervous father. And I’m especially nervous with black boys. (Murmers and calls of “yes” from the audience.) So even though he was going to high school, his daddy followed him (laughter) —  and visited him often, in high school.

“While we lived in Cheverly, my children grew up here. Their friends are from here. They came to parties here, in this community. I followed them to parties (laughter). And it was that coming here that made me look around and understand how great it is.”

Finally, Baker talked about his wife, Christa Beverly, who is suffering from Alzheimer’s disease:

“When I took over this job, when she couldn’t sleep at night, I would drive her to places that she talked about (back) when she could talk. And I couldn’t help but thinking as I was riding over here today, as we passed Nova Avenue, one night I stopped there on one of those sleepless nights, about 2 in the morning, which is kinda scary, and she pointed and I said, ‘Honey, we’re going to tear down these buildings.’ And all she could say was, ‘Oh – you need to do that quickly.’

“That pretty much was it. And what that did, and what I understood then was, time is not on our side. That people’s lives are affected by each second, whether it’s education, whether it’s health care, whether it’s quality of life, whether it’s living conditions. Time is the enemy. The lesson that she gave me that day stuck with me during my time here as county executive. It’s why we’re here today. It’s why we push. Thank you and God bless you.”