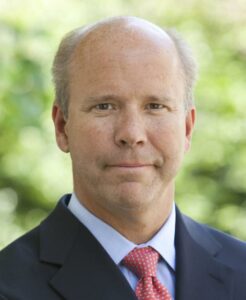 D-Day is coming in Maryland politics. That’s the day Rep. John Delaney (D) announces his political plans for 2018 — and perhaps beyond.

We don’t know exactly when it’s coming or what he’ll say. A Delaney campaign spokesman did not respond to an email on Tuesday seeking comment.

Rumors, predictably, abound. One plausible one says he’s meeting with his staff at the end of the week to clue them in. Another credible one says he’ll reveal all in an op-ed Friday — possibly in The Washington Post.

The smart money currently says Delaney won’t run for any office in 2018 — but will perhaps signal his intent to test the presidential waters in 2020. But the smart money can get awfully stupid awfully fast.

–Announce he’s stepping away from politics.

The presidential thing we mostly know about because Chris Matthews blabbed something about it on one of his “Hardball” shows a couple of months ago. But as we used to say on the streets of New York: That shit didn’t come from the sky.

In the era of Trump, anyone is a plausible potential presidential contender. Delaney may seem like a relatively obscure and relatively junior member of the House of Representatives, serving in the minority party.

But he’s worked in a bipartisan fashion without abandoning his principles. He’s an accomplished businessman and a self-made multimillionaire and a thoughtful guy besides. Who cares if James Garfield is the only president to have been directly elected from the House of Representatives?

Whatever Delaney decides to do, his moves will be very consequential in Maryland. He’ll be a top-tier contender for governor if he gets in that race. And his decision to leave Congress would stir up a crazy beehive of activity in his district and elsewhere in the state — as Maryland Matters illustrated in a recent chart.

So the waiting game should be over soon — right, Congressman?

Meanwhile, the other campaigns for governor continue to roll along.

Prince George’s County Executive Rushern Baker (D) made headlines earlier this week when he announced that four of the county’s state senators — Joanne Benson, Ulysses Currie, Douglas Peters and Paul Pinsky — were endorsing his gubernatorial bid. This struck us as a bit of a “Dog Bites Man” situation, as we say in the news biz, but whatever.

The more consequential news out of the Baker camp, unreported, is that he has hired Casey Ryan to be his finance director. Ryan has worked as the deputy finance director for New York Gov. Andrew Cuomo (D) since 2015, according to his LinkedIn profile. He also directed the New York State Democratic Committee’s operation at the 2016 Democratic National Convention and has worked for Berger Hirschberg Strategies, a national firm that raises money for politicians, nonprofits and capital campaigns.

He’s a 2012 graduate of Indiana University of Pennsylvania.

The last piece of interesting gubernatorial news that emerged on the Democratic side this week was the word that Krishanti Vignarajah, the former policy director to Michelle Obama in the White House, is eyeing the gubernatorial primary. Kudos to blogger Ryan Miner for his scoop.

Vignarajah, a native of Sri Lanka who grew up in Baltimore, looks like a very intriguing and appealing candidate, if she runs. The race is crying out for a woman and the state Democratic Party is crying out for fresh faces.

Vignarajah is now the second woman to be publicly pondering the race, along with policy consultant Maya Rockeymoore, whose interest was first reported in this space last week. Vignarajah and her husband, Collin O’Mara — who is president of the National Wildlife Federation and a rising star in the national environmental movement — have a six-week-old baby daughter, Alana. Read this adorable story from the Wilmington News Journal about their courtship and wedding.

But here’s the thing: We remember, after the 2000 White House election, when a mid-level Clinton administration official named Tom Perez, distraught about George W. Bush’s victory over Al Gore, decided to get into politics. The first office he ran for: Montgomery County Council.

So here in 2018 we have two mid-level Obama administration officials, Vignarajah and Alec Ross, distraught about Donald Trump’s victory over Hillary Clinton and thinking about getting into politics. And the first office they contemplate running for is governor?

They may be terrific candidates and voters may embrace them. We’re eager to learn more about them. The Maryland Democratic Party needs new blood. But since when did governor become a starter office?

Bill Turque, the estimable local reporter for The Washington Post, is leaving the paper on Friday after 15 years. He’s headed to Kansas City, where his wife Melinda Henneberger, another esteemed journalist, has taken a job as an editorial writer and columnist at the Kansas City Star.

No word yet on the next act for Turque, who has also written for Newsweek, among other publications. But we’ll miss his insightful coverage of Montgomery County and other Maryland matters. Godspeed!

The National Republican Congressional Committee (NRCC) added Rep. David J. Trone (D-Md.) to its 2022 target list Wednesday. Trone is the only member of…

Opinion: An Open Letter to Sens. Cardin and Van Hollen on Redistricting Reform

Dear Senators, Now, the “For the People Act of 2021” is in your hands. The Senate Rules and Administration Committee has set a May…

Well, we’ve had time to read through and absorb the latest round of state campaign finance reports, and here’s our big takeaway: State Comptroller…