CRISFIELD, Md. — If Bruce Bereano thought Gov. Larry Hogan (R) would park himself beneath the glad-handing lobbyist’s massive tent for an hour or two Wednesday, he was surely disappointed with the way the annual J. Millard Tawes Crab and Clam Bake played out.

Despite intense sunshine and record heat strong enough to melt cheese cubes into sauce, well-wishers formed a moving scrum around the first-term executive and his clutch of picture-taking campaign aides.

Many of the people who got close enough for a handshake would lean in and say, “You’re doing a great job.”

Typical of the attendees wanting a handshake and a pic was Shannon Hinman, a teacher clutching beers with a friend.

“I’m a Democrat but I do support Gov. Hogan,” she told Maryland Matters. “He’s decreased the deficit but he didn’t support Donald Trump. He’s very down to earth and with the people… He’s not partisan.”

Keeping with tradition, the Tawes event draw a large crowd of Lower Shore residents, state legislators and challengers, journalists and state government types. They pounded away on crabs, slapped one another on the back and tried to find shade or a spot close to one of the large fans that hovered near brown paper-covered tables.

One of the first people the governor encountered upon arriving at the Somers Cove Marina was Kathleen Matthews, newly-elected chairwoman of the Maryland Democratic Party. The two exchanged pleasantries and reminisced about prior meetings, like their encounter with Pope Francis in Washington, D.C., last year.

“Tell your husband hello,” Hogan said as he moved away. Matthews took measure of the man she is charged with helping to defeat.

“His popularity in the polls looks very strong,” Matthews conceded in an interview. “He’s been very successful at dodging the tough issues. But he has not really taken on issues like Medicaid funding and the Affordable Care Act… He hasn’t taken on Trump in the way that other Republican governors have.”

Gamely working the crowd on the Hogan-friendly Shore were a few of the Democrats seeking their party’s gubernatorial nomination.

Prince George’s County Executive Rushern Baker wore an Under Armour golf shirt with the slogan “For All of Us” as he shook hands and shared laughs with people inside and outside the Bereano tent.  Later, he and Hogan embraced.

Sen. Rich Madaleno (D-Montgomery) drove himself and a clutch of supporters to Crisfield in the family minivan, with three generations of Madalenos aboard.

“I’m getting a great reception, meeting people who are anxious for real change to come to Maryland,” he said. “One of the things I’ve been trying to tell people is change is inevitable, growth is optional. And while the governor is taking credit for all of the changes that happened, actually we need to start getting back on the path to growth and progress for all parts of Maryland. I’ve been talking to voters down here who are anxious to hear about a different opportunity.”

Madaleno also stayed on the Shore after the crab feast, for meetings Wednesday evening in Salisbury on health care policy.

Tech entrepreneur Alec Ross walked with a distinct sense of purpose ahead of a youthful group of sign-toting volunteers in white T-shirts. He stopped by the Salisbury University tent and was overheard talking about a solar parking lot project. With another group of people, he talked about the need for high-speed, low-cost Internet for rural areas in the state after learning they were from Crisfield. He talked about vacationing in Ocean City with some people from that resort town (he says he likes crowded beaches). He talked about his new favorite spot in Salisbury with a group of young men (it’s Evolution Craft Brewing Co.).

On a few occasions, Ross took the opportunity to remind some of the folks picking crabs and munching on fried clams and French fries about his role in the Obama administration.

Ross, a tech policy expert, worked as a senior adviser for the State Department.

A woman in the crowd asked to have her photo taken with him. Afterward she said she was very impressed with him. “If he could just get people to sit down in a room with him, they would like what they hear. He’s got a lot of good ideas.” A sample of the eats at Tawes.

Attorney Jim Shea, a veteran of past campaigns, talked with voters about the novelty of being in the ring – and of being at the crab feast – for the first time.

“It’s a reminder that if you’re going to run for office and you want to serve the people of Maryland, you have to be willing to go anywhere,” he said.

In interviews with reporters, Hogan faulted “both parties” in Washington for failing to come together on health care, and he lamented the latest bruhaha with legislative leaders over the fate of two gubernatorial appointees who Treasurer Nancy Kopp has said should not be paid because they were not confirmed by the state Senate.

State Comptroller Peter Franchot, a Democrat who has voted frequently with Hogan on the Board of Public Works, noted that whomever emerges victorious from the June primary will have to work quickly to bring the party together for the fall campaign against Hogan.

“He’s the second most popular governor in the country,” Franchot told Maryland Matters.  “We can’t beat him just by criticizing.  There has to be a positive message.”

Rarely hesitant to go after fellow Dems, Franchot added, “It would help if we did our jobs and campaigned a little less.”

Hogan has not officially announced his intention to seek a second term, saying he will probably do so in the coming months.  Offered the opportunity to respond to criticism from Madaleno that he takes credit for projects he once opposed, Hogan declined.

“The reaction we’re getting is 100 percent positive,” Hogan said.  “I think people are happy with the job we’re doing. People feel they can relate to me and that I’m one of them.”

Baker said the GOP’s unsuccessful efforts to repeal Obamacare – and the deep unpopularity of the American Health Care Act – was a theme that came up repeatedly in conversation. “Are we going to have quality health care? I got that (question) a lot today.”

Holding forth per tradition at the opening to his tent, where slices of Smith Island chocolate layer cake were being passed out to dozens of state lawmakers and their guests, Bereano argued forcefully for a second Hogan term.

“It’s very simple,” he said. “People genuinely love him. He’s down to earth and they see he cares. He’s not serving as governor for himself… He has differentiated himself from other elected officials.”

As if to underscore the point, a group of African-American women – who are of critical importance to Democrats as they strive to retake the State House in 2018 – made their way from their table to the Hogan scrum. “You guys,” one of them said, “I want a picture with the governor!”

“He’s right over there,” another lady said.

And off they went.

ON THE LOCAL FRONT

Outside of the gubernatorial election, one of the hottest 2018 race in Maryland is taking place on the Lower Shore, where Del. Mary Beth Carozza (R) is expected to take on state Sen. Jim Mathias (D). Both spent a good bit of Tawes shaking hands in close proximity to one another.

Carozza would not commit to making the race. 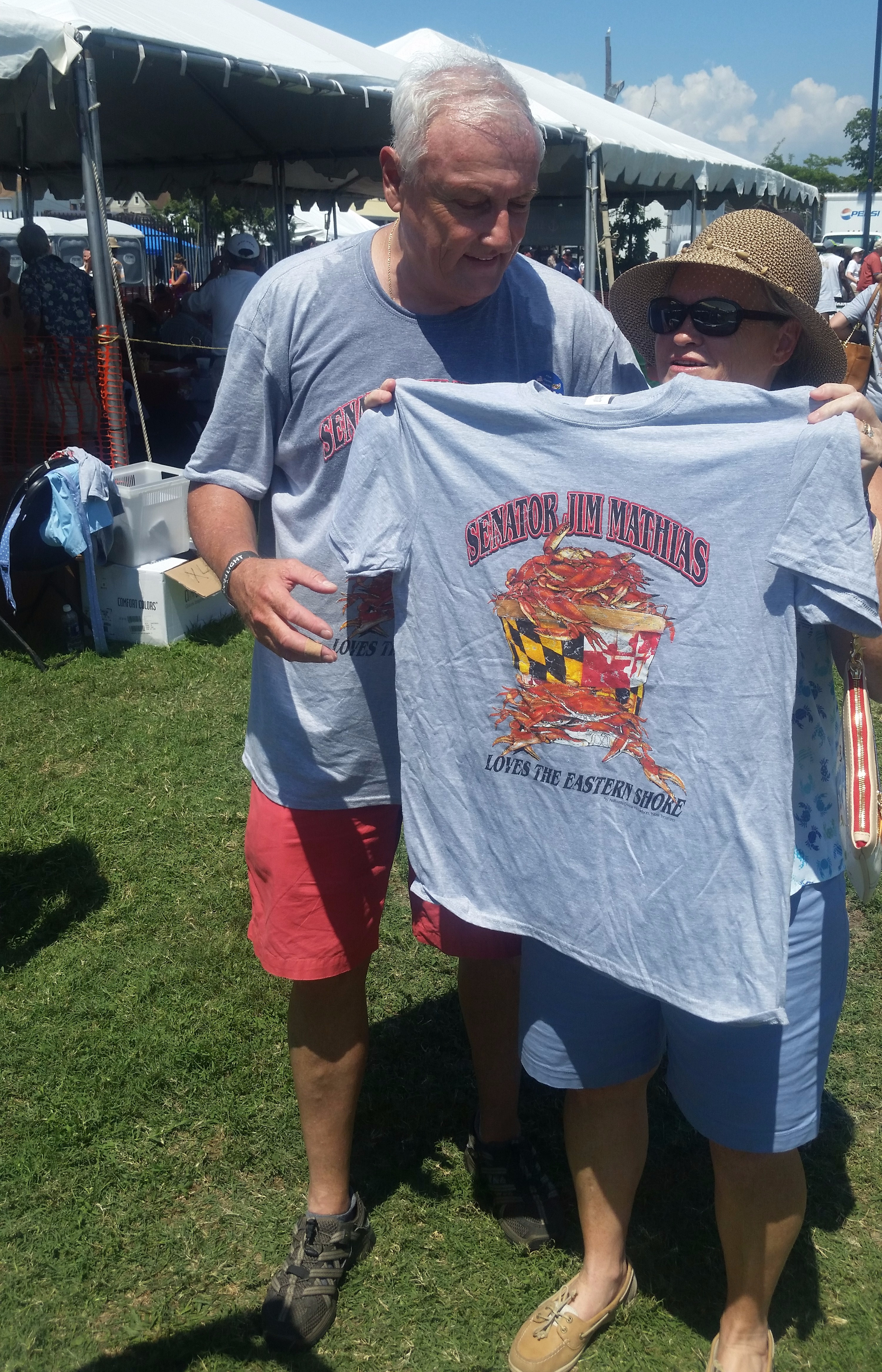 “There’s no announcement to be made,” Carozza said. “Are locals encouraging and supporting a possible run? Sure. I’m taking their guidance and advice to heart. This crab fest is a nice way to treat volunteers as a thank you.”

Carozza and Hogan had a big show and hug when they first ran into each other, which prompted a lot of clapping and shouting from Carozza supporters.

Mathias spent a lot of time outside of his tent, talking to people as they came through.

“I’m not worried about other candidates, other campaigns right now, I just want to serve the state and my supporters,” he said. “This crab feast is about meeting them and thanking them.”

The general consensus among political insiders was that Mathias and his supporters were wearing the best T-shirts of the afternoon.

“He shirts well,” said one lobbyist.

Angela Breck is best known for her 17 years as editor of the Maryland Independent in Charles County. She also has been an editor of local editions of The Gazette newspapers in Montgomery and Prince George’s counties. She is currently a contributor to The Lexington Park Leader in St. Mary’s County, and to Southern Maryland — This Is Living.

All posts by Angela Breck